The process is not that complicated, all you need is one Firefox extension and edit a single configuration file of Firefox. Besides this obvious change he is suggesting several additional changes that remove objects from the menus which are generally not needed that much.

I do not want to get into to much detail here but he manages to stuff everything into one tiny menubar which can be done by following his instructions. I decided to use this setup on my widescreen notebook. Take a look at the following image to get an idea of how it could look like. Click to view the full size. 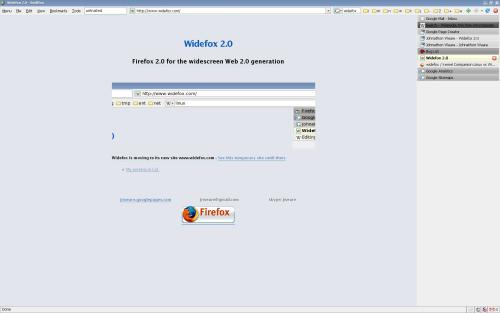 The website has a few more sample layouts featuring one for dual screen monitors which looks really great.

Update: Tab Mix Plus does not ship with options anymore to display all tabs in the sidebar. You can only display them above or below the content, but that is about it.

Without doubt the best extension for Firefox to display all tabs in the sidebar of the browser is Tree Style Tabs which does so for you. It automatically moves the tabbar to the sidebar and displays all open tabs in relation to each other. This means that if you spawn a tab from an open one, it will be automatically linked to it so that you now which tabs belong to each other.

The add-on supports many features that you can use to customize the layout and display further. You can for instance collapse or expand sub trees to save space on the screen, use drag and drop to reorder tabs or close all collapsed tabs at once.