There is no obvious way in Firefox to reduce the size of the menu toolbar. I always thought that it was a big waste of space to have this bar enabled all the time. I'm personally using the Tiny Menu Firefox extension which displays just a Menu item next to the usual buttons such as forward, back and reload. I added a screenshot of how my setup looks like at the end of the article.

I did find another interesting Firefox extension called Personal Menu which reduces the menu bar to three buttons that can be placed in one of the other toolbars of the browser. Two buttons are for the bookmarks and the history function while the third is fully customizable. You can add any kind of menu from the menu bar for instance to this personal menu.

You should add at least the Addons menu before you disable the Menu Toolbar. In case something goes wrong you need to be able to disable the extension again. Take a look at the screenshots to see the differences: 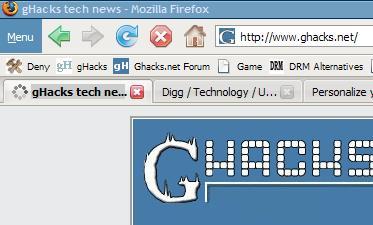 Update: Mozilla has modified how Firefox displays the menu in version 4.0 of the browser. Now, a single menu button is displayed instead. You can still switch to the old menu style though so that the extensions above still work for that purpose.

The Personal Menu extension on the other hand has been changed slightly. While it retained its original functionality if you are running Firefox 3 or older, it enables Firefox f and newer users to modify the Firefox button instead.

What that means is that you can add, move or delete entries in the menu so that the menu looks exactly like you want it to. If you think that items are missing, add them, and the same goes for items that you never use, as you can easily remove them from the Firefox menu.

Once you have installed the extension you get an "edit this menu" link when you open the Firefox menu that you can click on to customize it.

Just select the items that you want to add and click on the plus icon afterwards to add new menu items to the menu, or select existing menu items and the minus icon to remove them. Use the up and down buttons to change the order of items in the menu.

If you want to customize the Firefox menu, Personal Menu is your best option to do so. The extension leaves little to be desired.