Sometimes files or folders are locked by the operating system so that you cannot move or delete them, or run other operations on them that require full unrestricted access.

A basic example is a video that you play currently in a video player. When you try to delete the video while it is playing, you get an error message stating that you cannot delete the file right now. Why? Because it is locked by the video player application which prevents the delete command from being carried out.

That's also one reason why you cannot uninstall or upgrade software while it is open.

It can happen however that a file remains locked even after the process or application that locked it initially has been terminated on the system, or so you think at least.

That's where a program like Unlocker from Cedric Collomb can help you. It can lift the locked state in most situations so that files, folders and programs can be deleted without error messages in Windows.

Have you ever received on of the following messages while trying to delete a file or folder from your hard drive using a Windows operation system?

Everyone gets these error messages from time to time. I hereby present you a tool that "unlocks" the file and lets you delete it afterwards with just a few simple clicks.

The program "Unlocker" is freeware, and its size is only 76k.

Note: The program ships with third-party adware offers in the installer. Make sure you select Advanced during installation and uncheck the offers there before you continue with the installation. 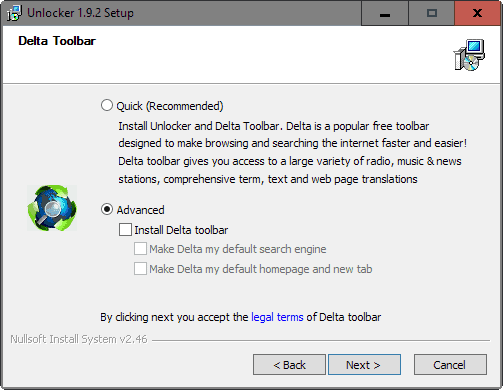 Simply install it, then you have a new entry in the right click context menu called unlocker. From here it is as simple as right-clicking on the folder or files you can't delete in Windows Explorer and selecting the Unlocker option from the context menu.

This most of the time unlocks the file so to speak, cuts off all links to processes it may have for instance, so that you can delete or move the files or folders without further issues.

Note: The author's homepage is flagged by Google Safe Browsing currently because the software ships with third-party offers. It is not distributing malware but so called potentially unwanted software. If you uncheck those offers during installation, you have nothing to worry about in this regard.

The file unlocker has been updated a lot in recent years, and it is now capable of more than just unocking files and folders on Windows machines. It can now delete files and folders if the path is to long for instance. It is also offered as a 32-bit and 64-bit version.

The program has last been updated in 2013 but it still works fine on all recent versions of the Windows operating system.