Why standard passwords do not cut it anymore

The majority of computer users use weak passwords when they register for online services, create Windows accounts and other activities that require them to pick a password. The only situation where a stronger password is selected is when a service forces them to do so. Most Internet services do not, probably because of fear that many users leave the account creation screen when they run into password creation troubles (12+ characters, 1+ number and special char).

There are two main reasons why weak passwords are selected by a lot of Internet users. The first is because it is easier to remember and there does not seem to be an immanent danger in doing so. The service would request a stronger password if it would not be secure, right? And they surely know best. The second, because they can.

Attackers use a couple of methods to decrypt passwords. The two most common methods are brute forcing and dictionary attacks. In brute forcing, all possible password combinations are tested starting with aaa or whatever the minimum required password is up to about eight characters tops. Why eight? Because afterwards, it takes years to get results if you use a home setup to crack the passwords.

Ars Technica ran a story yesterday about a 25-gpu cluster that cracks every standard Windows password of eight characters or less, in less than six hours. The machine, designed specifically for brute forcing algorithms can attack 45 other algorithms at speeds that were previously not in the realm of possibility for home usage.

The security researcher who build the machine tested its predecessor against the leaked LinkedIn password database. The result? 90% of all 6.5 million passwords were cracked by it by using a combination of brute forcing and a 500 million strong word list. With the help of the new machine, the attack would have lasted only a quarter of the time. While the old machine's 15.5 billion guesses are remarkable, the new one's 63 billion against Sha1 (the LinkedIn algorithm) are raising the ante once more.

While remarkable, it needs to be noted that this only applies to offline attacks, where a password database or file has been retrieved and is available locally. The speed depends a lot on the algorithm used. MD5 for instance maxes out at 180G/s while slower hashes like bcrypt (05) at 71k/s. 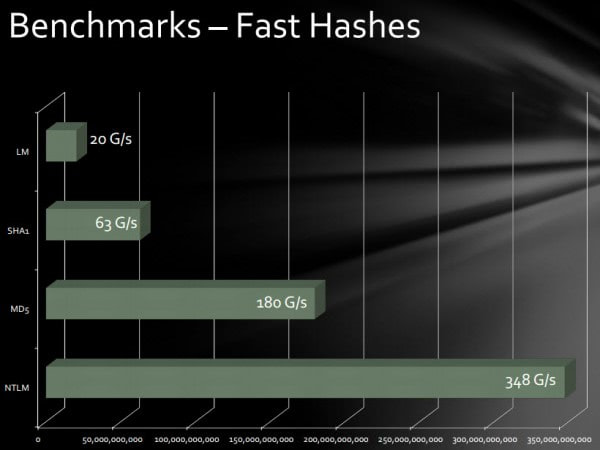 The only feasible approach is using a password manager to create strong unique passwords every time you sign up for a service. You can use an offline password manager like KeePass for that or an online manager like LastPass. For Windows and other operating systems, I'd suggest to encrypt the hard drive with a program like DiskCryptor to protect the data on the drive against attacks.