Don't like the way how Windows 8 is shaping out to look like when it is released? Prefer the look and feel of Apple's Mac OS X operating system? Then you may be interested in the Mountion Lion Skin Pack for the Windows 8 Consumer Preview which changes the interface of the operating system significantly.Â  The developer has promised to release an update once Windows 8 final is released by Microsoft so that this should not be of concern right now when installing the skin pack.

What makes this total conversion interesting is that it does not require you to patch system files by yourself or to prepare the operating system in another way. The Mountain Lion skin pack comes with a single installer for 32-bit or 64-bit editions of Windows that will do all the installing and configuring for you.

The full download has a size of about 35 Megabytes and you need to know that some of the programs that it will install require the Microsoft .Net Framework 4.0. This should not be an issue though as support for it is integrated natively into Windows 8. You should pay attention to the installation process as you may end up otherwise with the Babylon Toolbar. The rest of the installation is straightforward and very comfortable. Just follow the installation instructions and restart the computer afterwards.

The installer gives you the option to uncheck third party programs from being installed. For the best user experience it is however suggested to keep the default configuration. You end up with more than ten different programs, including popular applications such as Rocket Dock, Xwidget or Moveex. 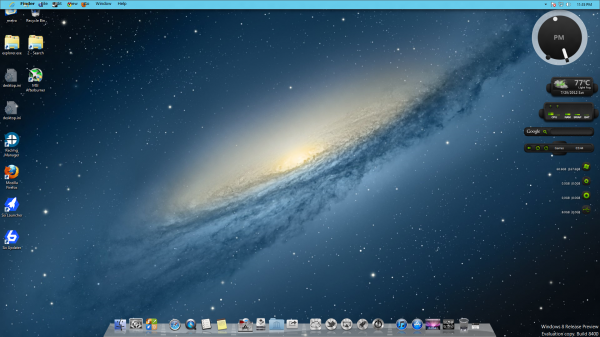 If you are used to work with Mac OS X you will probably feel right at home. Pure Windows users on the other hand may need some time getting used to the skin as it changes several interface elements significantly. The Windows taskbar for instance is moved to the top of the screen, while the dock is listed at the bottom of the screen.

You can uninstall the Mac OS X skin pack like any other application on the system, and you end up with pretty much the same system as before. When I uninstalled the skin pack, only the top position of the Windows Taskbar was not changed by the process, but it took less than ten seconds to move it back into its bottom position.

The Mountain Lion theme for Windows 8 may not be after everyone's liking, but those who want to give it a try benefit from the straightforward installation and uninstallation of the total conversion.

If you ask me, I'm not a fan of total conversions as they are never as good as the original. I had a few usability issues when I tested it and decided to uninstall it rather quickly again.