The Metro user interface that Windows 8 ships with is certainly controversial with the majority of users either hating or loving it. If you are part of the group that likes Metro, or at least thinks it is not totally bad, then you may like where the Windows Explorer replacement Immersive Explorer is heading to.

The program, available for both Windows 7 and Windows 8, is a desktop replacement for Window's default file browser in Metro-style. What does that mean? Well, after you run the program you will immediately notice that it starts in fullscreen and displays an interface that looks and acts in many ways like other Metro applications. 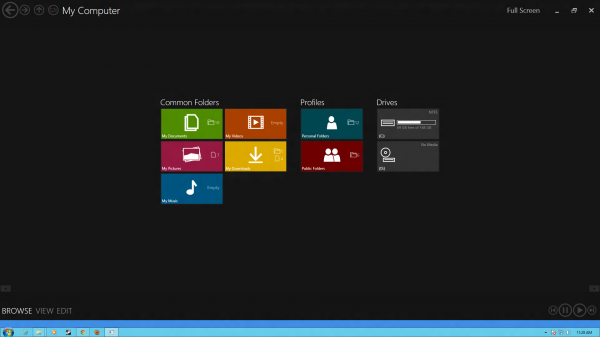 The program displays common folders, user profiles and drives on the start screen, and it takes a single tap or click to display the contents of the folder on the screen. You can run programs with another tap or click, or use the back and forward buttons at the top to quickly navigate to another folder.

This early version supports picture viewing and MD5 and SHA1 hash calculation. What you will notice is that several options displayed in the program interface, like displaying the folder size or file operations are not yet supported by the application.

Among the future features listed by the developer on the project website are audio and video playback support, touchscreen support, file system operations, advanced view filters and sorting, and picture manipulations.

As of now, it is more a concept of a program than something that you can really use in day to day activities on your system. If the developer improves the program and implements the future features into it, it could become an alternative file manager for Windows 7 and 8 users who work with touchscreens and prefer to do so on the desktop as well.

The developer has promised to release the source code of the application when it reaches version 1.0, which should definitely be something to look out for.