Avast 7 Will Install Google Chrome, If You Do Not Pay Attention

Avast 7 has been released a few days ago and it has not only received praises but also criticism by part of the security software's user base. Users have been complaining about a variety of things, including slow system starts on Windows 7 among other things (Caused by the installation of Microsoft Security Essentials on the machine. The only fix is to uninstall Avast or MSE). Two Ghacks readers have mentioned another issue after upgrading to Avast 7. The software did install the Google Chrome browser on their system, and made it the default system browser.

When you run the Avast 7 installer, you are greeted with a start screen where you can select the express, compatible or custom install options. Express basically installs the antivirus software with the default settings, compatible installs it as a second line of defense in addition to other security software running on the system, while custom install offers the means to select the program modules that you want to install.

The very same page lists another program that will be installed if Avast users do not pay attention to the menu. The lower quarter of the screen advertises Google Chrome, and displays two selection boxes. These boxes are checked by default, so that Avast 7 will install Google Chrome on the system and make it the default browser on the system. 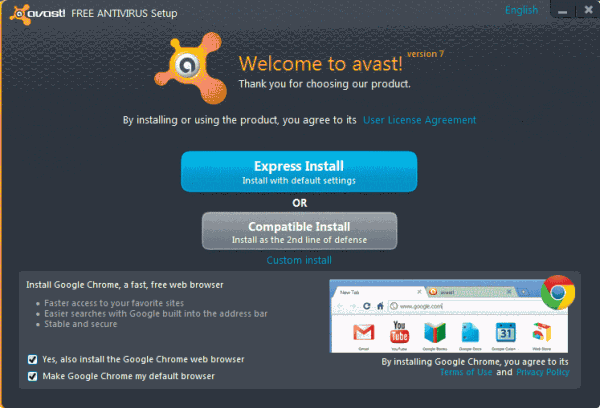 The option to not install Google Chrome does not come up afterwards anymore, even if you select the custom installation option. That's a big usability issue comparable to toolbar and adware offers that you find in other program installers from time to time. The Chrome installation may not happen right away, as it was reported to commence after the first system boot.

If you have installed Google's browser by accident, you can uninstall it again via the uninstall a program control panel applet. You also need to open another browser to make that one the default system browser again.

Bundling Avast with Chrome may alienate part of Avast's user base. I do not know if the browser is also provided to users who upgrade from previous versions of the security software. It would be nice if users who upgraded their version could tell us if Chrome was installed as part of that upgrade as well.