Dropbox is still working on the next version of their client application, and that version's big new photo import feature. Dropbox yesterday have updated the experimental client build version to version 1.3.19. The version is available exclusively in the forum, where it can be downloaded for all support operating systems (except mobile clients). The new versions fix a number of issues, among them a fix for an autoplay issue under 64-bit versions of Windows Vista, and a general fix under Windows to support imports from SD cards with no name.

The new version, in addition to that, has seen performance improvements on all platforms. Especially the cpu usage has been reduced during imports. Photos furthermore show up correctly rotated on all platforms now.

Dropbox users who used the experimental build in the past to import photos into their account have received free storage space for that, up to a maximum of 5 Gigabytes. New users, who are using the photo import option for the first time will now only get a maximum of 3 Gigabytes of free space.

Dropbox employee David E. notes that previous users will still get up to 5 Gigabytes of free storage. Both receive the space in 500 Megabytes chunk whenever they import photos into their Dropbox account using the photo import feature. He also mentioned that Dropbox users will keep any additional storage space that they have earned during the beta.

Dropbox users who have already earned the maximum of five additional Gigabytes of storage space will not receive another 3 Gigabytes when they update and use the new client.

Some users are reportedly seeing a new web interface, while others are still seeing the old interface on the Dropbox website. At this point, it is not clear if Dropbox is A-B testing a new user interface, or if the company is rolling out a new interface to all users. 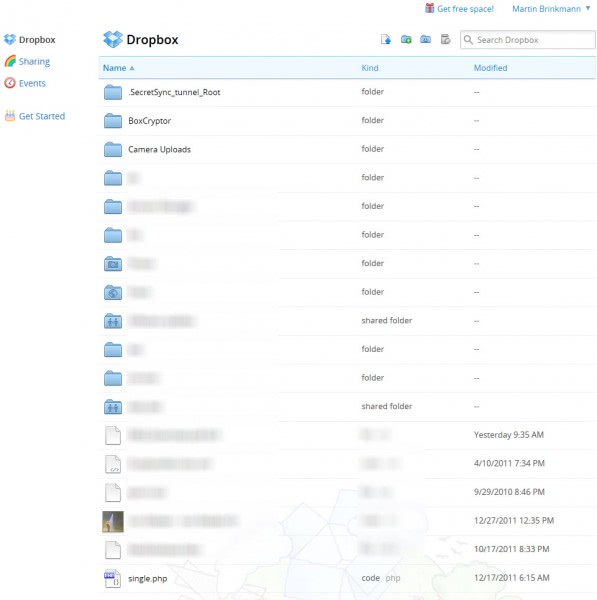 I noticed that it does not display free and used space information directly on the screen. You find the information with a click on your username in the upper right corner of the screen.

Are you seeing the new web interface already? If so, what's your take on it?

Previous Post: « Check Social Media Network Username Available With Knowem
Next Post: « Avast 7 Will Install Google Chrome, If You Do Not Pay Attention