A couple of weeks ago I was lucky enough to get the world exclusive on my personal website for EXO PC's forthcoming EXOdesk.Â  This is a 40-inch, 10 point multi-touch Viewsonic screen (I wasn't allowed to say who the manufacturer was at the time) built into a piece of fine furniture and running a custom UI.Â  It is a genuinely intriguing piece of technology because EXO PC aim to sell it, when it goes on sale some time next year, for just $1,300.Â  They've done this by foregoing the computer and having the EXOdesk run from your own PC.Â  This is both sensible and clever, as most modern PCs will happily run two full HD screens now and it prevents the EXOdesk from ever becoming obsolete.Â  Obsolescence isn't really what you want from a piece of fine furniture.

Now though the company has gone public with yet more product concepts that are even more exciting than the EXOdesk, is such a thing were possible and are now showing what the touch interfaces of tomorrow will be like.

EXO PC launched jujst over a year ago with their excellent Windows 7 tablet, the EXO PC Slate.Â  This machine was widely priased for fantastic build quality and I even got one myself for this reason.Â  The company though is primarily software-focused and now they're returning to their roots developing and refining multi-touch interfaces.

The EXOdesk is still coming, and Viewsonic will have a prototype on their stall at the Consumer Electronics Show in January in Las Vegas.Â  Other products through include the EXOtable for your living room.Â  In the concept the company describes this as a device used to choose a movie, view and organise pictures and play a board game with your family.Â  Other uses include email and social networking as well as regular browsing. 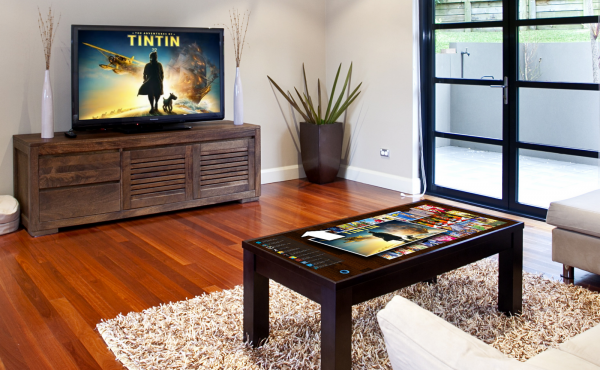 Their productivity EXOtable takes things to a whole new level however with a draughtsman's type workstation complete with 32 point touch screen.Â  If set to work with a variety of styli this desk would surely be the dream for any engineer, designer or technical expert.Â  It is a very clever and completely obvious use for multi-touch technology that is crying out to be put into full production.

The company's last EXOtable is a throwback to the gaming tables of the 1980's that came with PacMan and various other games.Â  This sit anywhere 32-point touch screen is perfect for groups playing games together.

All of these products are concepts for now, though I can believe they will be coming soon because the EXOdesk will already be shown off to the press and public just next month.Â  The price point for all of these will be low, which is what's needed.Â  Microsoft's Surface is still a very expensive technology because of the in-built computer.Â  With the EXOdesk and EXOtables, EXO PC are taking a much more sensible, practical and, I think, a much more long-term approach to the technology.

The products will live or die on the quality of the interfaces and apps available for them however.Â  I don't doubt that app developers will clamour to write innovating new programs for these devices, but the price point is critical here to help get them in places where enough people will use them to get developers interested.

All in all though these are truly fantastic concepts and much closer to release than any similar technologies we've seen in recent years.Â  EXO PC is certainly a company to keep a close eye on.

Previous Post: « Firmware... If it Isn't Broken, Should You Fix it?
Next Post: « Nokia Lumia 800 Windows Phone Review