Remember the game Lemmings? The game was released by Dma Design on the Commodore Amiga, and later ported to several other systems. DMA Design made their way and are today known as Rockstar North. Lemmings was one of the most popular games of its time, and many gamers know the game even if they have not played the original version. Lemmings was that popular that a sequel was releases shortly after the release of the game. Oh No More Lemmings offered additional maps and the same game mechanics.

The original game was divided into four difficulty groups which each consisted of 20 levels each. The first, called fun, walked the player through the game controls. The task in each level is always the same. Get a certain amount of Lemmings, small creatures with green hair, from the level entrance to the level exit.

Lemmings can walk but do nothing else. If they walk into a wall their turn and start walking in the other direction, if there is a cliff they fall down and if there is something dangerous in front of them they walk right into it. 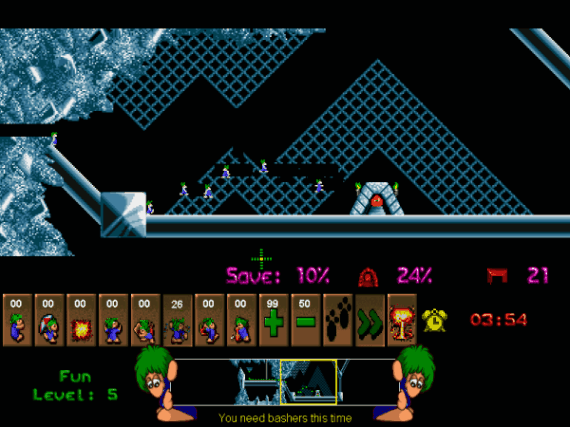 It was the player's task to guide the Lemmings from entrance to exit. A set amount of skills was available in each level which could be given to individual Lemmings. This included bridge building, climbing, parachuting, blocking and digging.

Lemmings Remake is available for Windows PCs. The freeware game includes all original Lemmings levels plus all levels of the sequel Oh No More Lemmings. Additional holiday related maps are selectable from the level selection screen. It is not clear if those are the levels of Xmas Lemmings, another popular sequel at that time, or custom made.

You have the option to play through all levels one after the other, or use the level selection screen to play a specific level. The campaign keeps track of your progress. There is however no option to select a difficulty group like it was in the original game. You start with the fun maps and end at the Oh No More Lemmings maps.

Controls, graphics and sounds are true to the original which older games will love. You still see the big green cursor on screen that you use to pick skills and lemmings. Players can pause the game at anytime, which becomes important at later stages to plan ahead. The atombomb and switches to increase and decrease the game speed are provided as well.

Lemmings Remake is a true gem, it is fun to play and should bring back old memories to players who have played Lemmings on the Amiga in 1991.

Downloads are offered here at this forum thread.