Microsoft has released Windows 11 Insider Preview Build 25247 for users in the Dev Channel. The update adds some new features, including a few that were introduced in the Beta channel last week.

Recommended websites in the Start menu

The Start Menu's recommended section will display a new content type called common websites. These are essentially trending websites based on your region or browsing history. Microsoft says that this is the first phase of testing the feature, so things could change in the future.

Users may remove a website by right-clicking on it. This feature is rolling out to users, so it may not be available for everyone.

Thankfully, Microsoft says that the feature can be disabled completely. I don't have access to it yet, but the option to turn off recommended websites should likely appear in the Settings > Personalization > Start page.

Seconds in the System Tray Clock 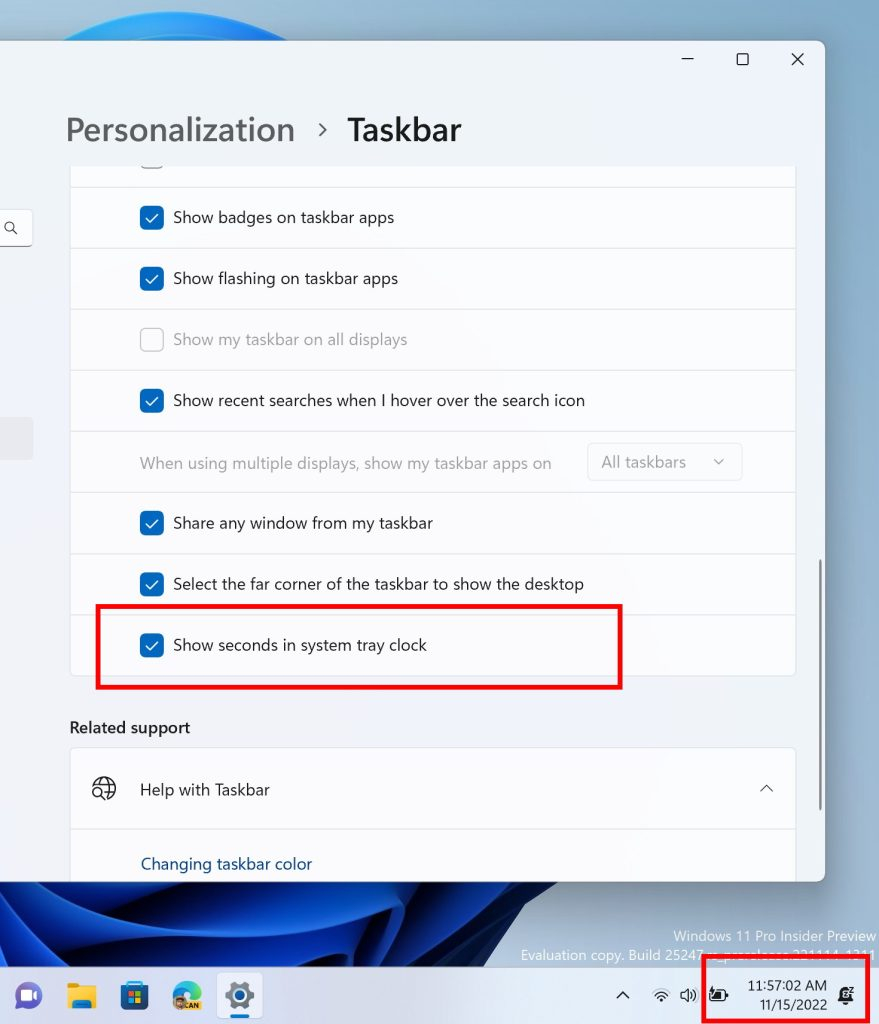 The System Tray Clock has regained the ability to display seconds. You may enable this option from the Settings > Personalization > Taskbar section. The improvement is rolling out to users.

Suggested Actions will now display a pop-up when you copy a text that has search potential. When you click on the selected action, a new Edge tab will be launched to run the search for the selected words. 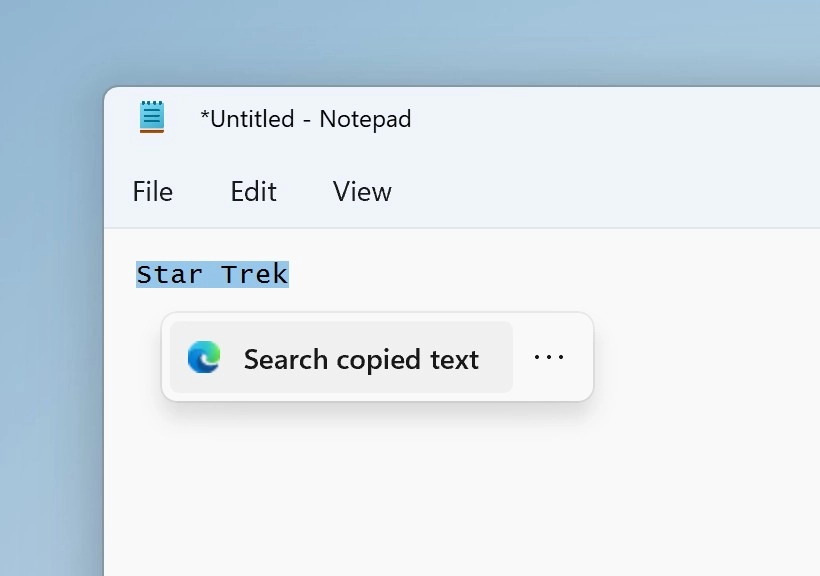 The new action is only be available for users in the U.S.

The Settings app's Accounts page displays a new bar that indicates how much storage has been used for each Microsoft product. It shows a banner if your storage space is running low.The quota bar from the Subscriptions card has been removed to prevent duplication of the data. 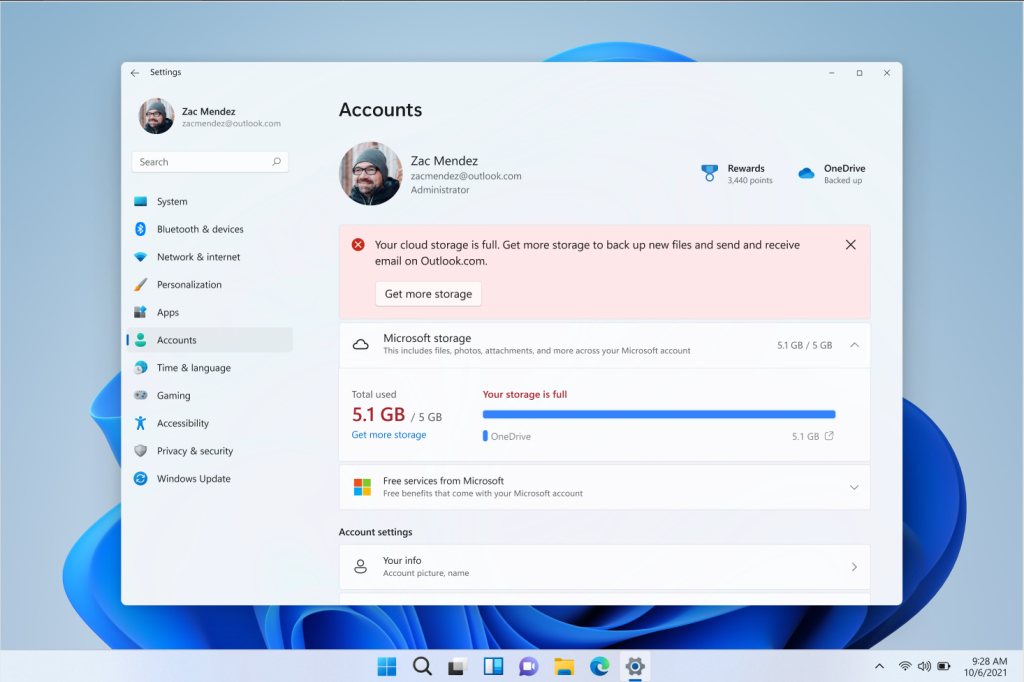 The company plans to add information about Microsoft 365 apps and services data that are tied to your cloud storage.

The jump list for the Microsoft Store in the Taskbar now lets you jump back to pages that you have recently visited. Right-click on the app's icon to navigate to specific sections in the Store, or to view products that you viewed. 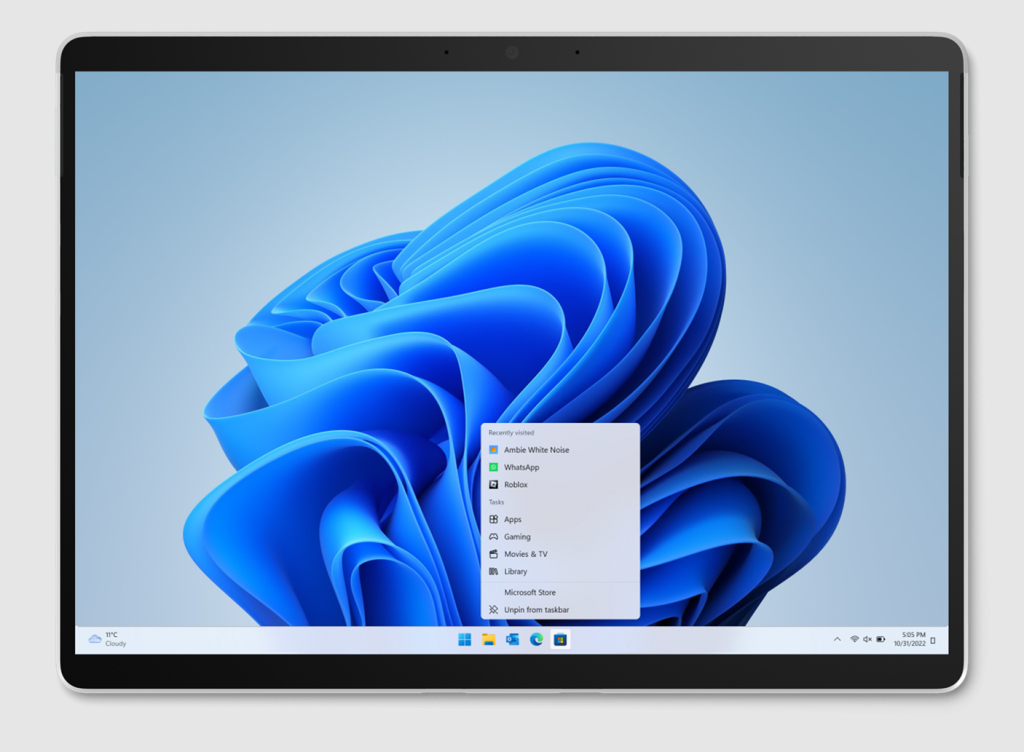 The new navigation shortcuts are rolling out to users with version 22210.1401.x of the Microsoft Store and higher.

A Search bar has been added to the Task Manager, it can be used to filter the list of processes, or to search for a specific one by the process' name, PID or publisher name. It can be accessed with Alt + F hotkey. The system monitoring tool supports Light and Dark themes, and a new Efficiency mode dialog. 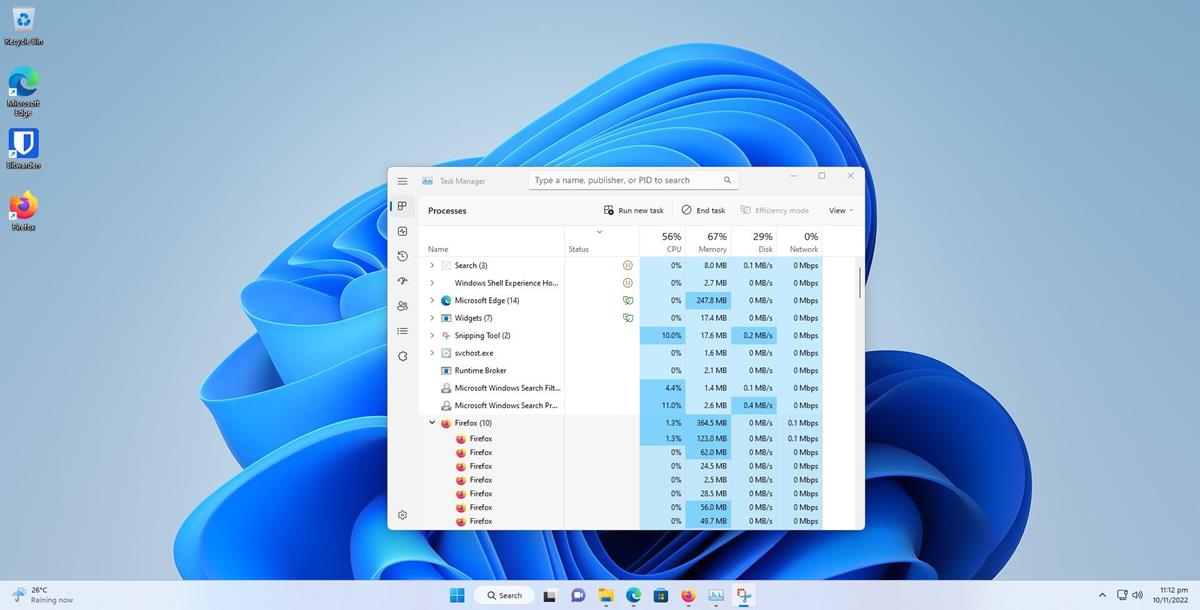 Windows 11 Build 25247 brings a new shortcut to access Windows Studio Effects from the Quick Settings. The latest Dev Channel build is rolling out Energy Recommendations to help users to reduce their carbon footprint.

Please refer to our previous coverage of Windows 11 Beta 22623.891, for more details about the above features.

The Search tool in Windows 11 has been improved to display more types of files and content on your PC, in the results box. There are two new French keyboard layout standards (AZERTY and BÉPO). The new keyboards support all the Latin-based languages of the European Union, Greek letters and scientific, mathematical, and financial symbols. Users may enable them from the Settings > Time & language > Language & Region section.

Note: The old version of the AZERTY layout is listed as Legacy, AZERTY.

Microsoft says it has improved the Emoji search for Japanese and Simplified Chinese languages in the emoji panel, by handling Kana/Kanji and Pinyin properly.

Microsoft has fixed a bug that was causing a SYSTEM_SERVICE_EXCEPTION bugcheck citing an error with win32kfull.sys. This issue occured when users tried to install the operating system using the Build 25227 Dev Channel ISO. A new ISO is available today which fixes this issue. An issue that was resulting in pseudolocalized text to appear across the system has been patched. The bug was also leading to garbled text in the navigation headings of Start’s all apps list for Chinese users.

Multiple explorer.exe crashes that were impacting taskbar performance have been resolved. The tablet-optimized taskbar should no longer be stuck in the expanded state when accessing the Quick Settings with the bottom right edge gesture.

There are too many fixes to list here, so I recommend reading the release notes for Build 25247 for more details.

There are several new known issues in the latest Dev Channel Build. The Taskbar may be cropped in half when the tablet-optimized taskbar is enabled. Search may not display results for some files that end in .cmd, .exe or .bat, as a workaround Microsoft is advising users to press the backspace key after typing, to view the results.

The new Task Manager's search bar does not filter the Processes page by publisher name.  The Services page may not display some services when you filter the list. Starting a new process when a filter is set may cause a split second delay in the process to show up in the list. Switching to a theme from the Task Manager's Settings page may cause some dialogs may not render in the correct theme. Changing the theme may result in the data content area of the Processes page to flash once.

The Task Manager's light and dark theme may not elements in its UI in the corresponding colors correctly, which could make it difficult to read the text. This issue occurs if you have set a custom color under Settings > Personalization > Colors. The workaround for this problem is to switch the Windows theme to Light or Dark. The Startup apps page in the Task manager may appear blank for some Insiders. Users are advised to use the Settings > Apps > Startup page, until the bug is fixed.

The Windows 11 Insider Preview Build 25247 ISOs are available for download from Microsoft's website. The company will not release a new Dev Channel build next week due to the U.S. Thanksgiving holiday.

Microsoft needs to stop messing with the Start Menu, you could argue that the Recommended Websites experiment is just another way to display ads.