Thunderspy: find out whether your device is vulnerable to (local) Thunderbolt security issues

A total of seven vulnerabilities are revealed in the analysis; these affect "all laptop and desktop systems equipped with a Thunderbolt 2 and/or Thunderbolt 3 family host controller employing Security Levels". All Microsoft operating systems from Windows 7 to Windows 10 and all Linux kernel releases from kernel 4.13 are affected. Apple Macintosh systems are affected partially only because of additional security measures that are in place by default.

A program has been created by the researcher that checks devices with Thunderbolt ports. The application is available for Windows and Linux; the Windows version may be downloaded from the Thunderspy website. It is compatible with Windows 7 and newer versions of Windows, and with Linux kernel 3.16 and Pyton 3.4 and later on Linux devices. 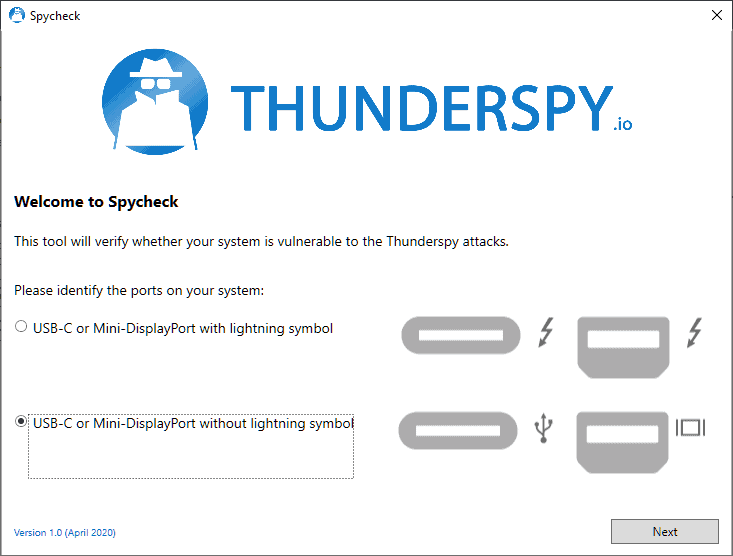 Spycheck prompts you to identify the ports on the device which can either be USB-C or Mini-DisplayPort with lightning symbol or without lightning symbol. Hit the next button once you have identified the correct port to have it check that port. Devices without Thunderbolt ports will show up as "not vulnerable" automatically. Suggestions are displayed on how to address the issue if a device is found to be vulnerable by the application.

The researcher created demonstration videos; the first demonstrates how to unlock Windows PCs in 5 minutes by exploiting vulnerabilities.

The second video shows how to disable all Thunderbolt security on a Windows PC permanently.

Now You: do you use devices with Thunderbolt ports? Are your devices vulnerable? (via Deskmodder)

Previous Post: « Superpaper is an advanced wallpaper app for Windows and Linux with unique features
Next Post: RapydMark is a portable benchmark tool for Windows »