Firefox does not include built-in translation options which is why users of the web browser need to install translation add-ons or rely on web services when it comes to translating content in the browser.

Google and Microsoft are in a better position than Mozilla considering that both operate translation services. Mozilla tried to introduce native translation support in Firefox several times in the past, e.g. in 2014 when it showcased translate functionality similar to the one in Chrome, and then in 2018 when it revealed that it was working on integrating Google Translate, and a year later to announce that native translation would finally come to Firefox courtesy of a research project called Bergamot.

It should not come as a surprise that there are plenty of translation add-ons available for Firefox. We reviewed several of them including To Google Translate or Translate Man.

S3.Translator was a popular translation extension for Firefox but it seemed discontinued some time ago. The developer of the extension released an update last month that brought the extension back from the dead. Considered one of the better translate add-ons for Firefox, reason enough to take a look at it.

S3.Translator uses Google Translate for its functionality. Translation extensions require plenty of permissions and S3.Translator is no exception to that. When you install it in your browser, you are prompted to give the extension eight extra permissions including permissions to access data on all websites, to interact with the clipboard, and to store unlimited client data. 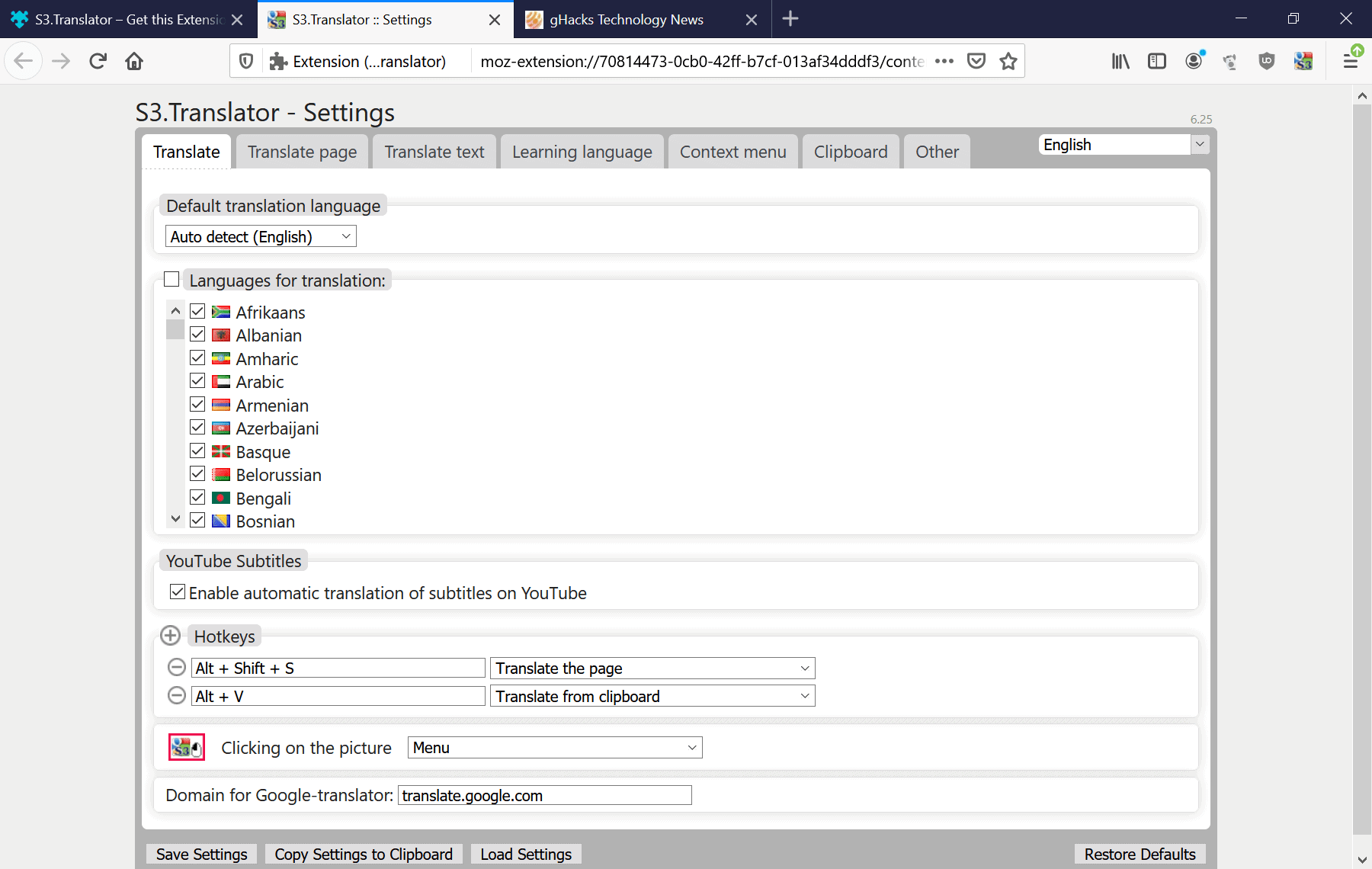 The extension opens its settings automatically after installation. The options provide lots of customization settings, e.g. options to select the target language for translations, the languages that you want translated, and more.

You may change hotkeys -- default Alt-Shift-S to translate the entire page or Alt-V to translate from Clipboard -- enable automatic site translations, and define how text selection and individual word translations function.

The extension adds an icon to the Firefox address bar that you interact with. A click opens the menu with options to translate the page, send the page to the Google website to translate it there, or or to enable automatic translation. Context menu options are also available but can be disabled in the options if not needed. 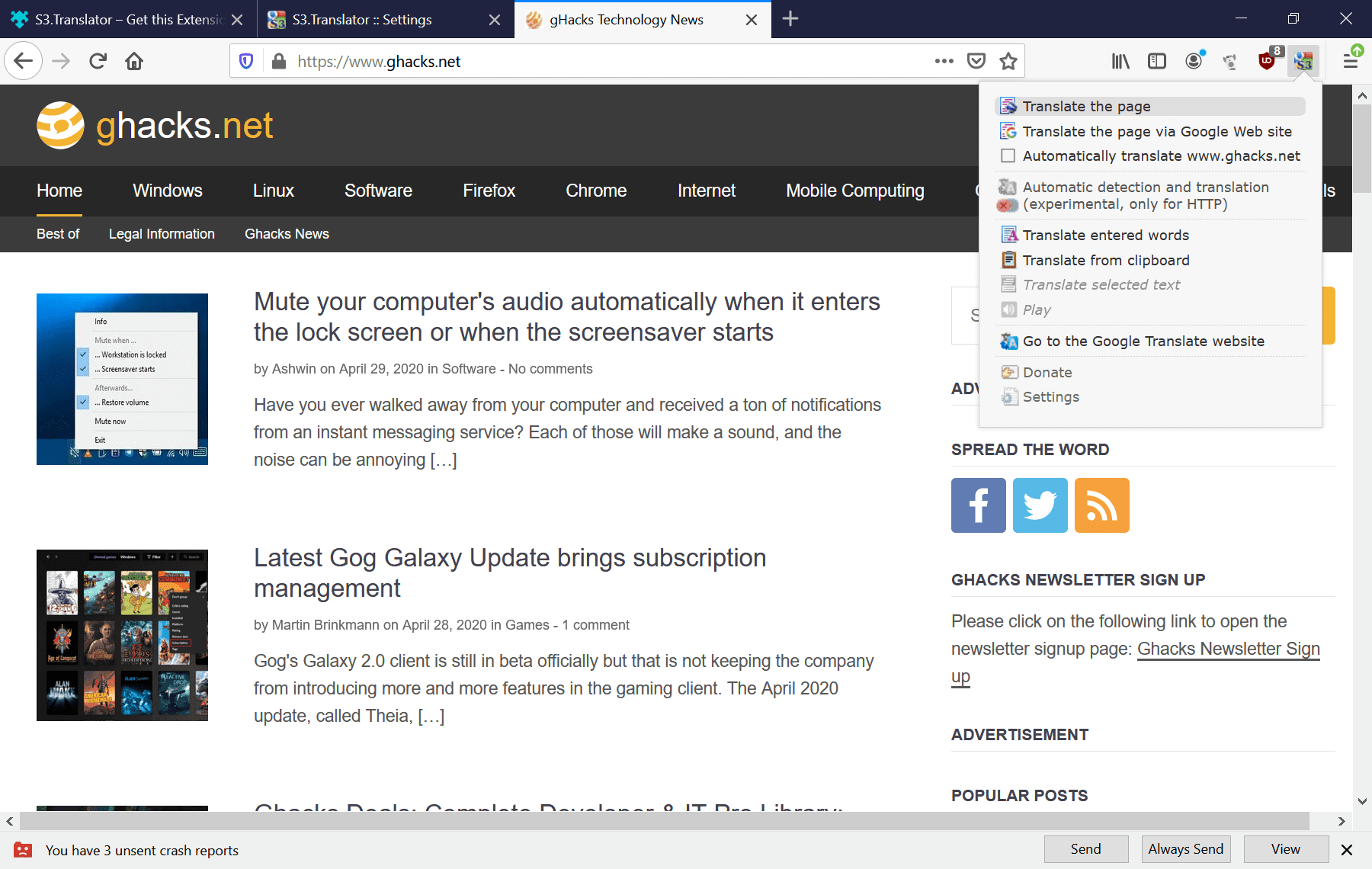 Translate requests result in some prompts after installation that inform you that connections to Google Translate need to be established.

If you select the full page translate option, a toolbar is added to the top of the page that provides you with options to switch the target language and to show the original page. 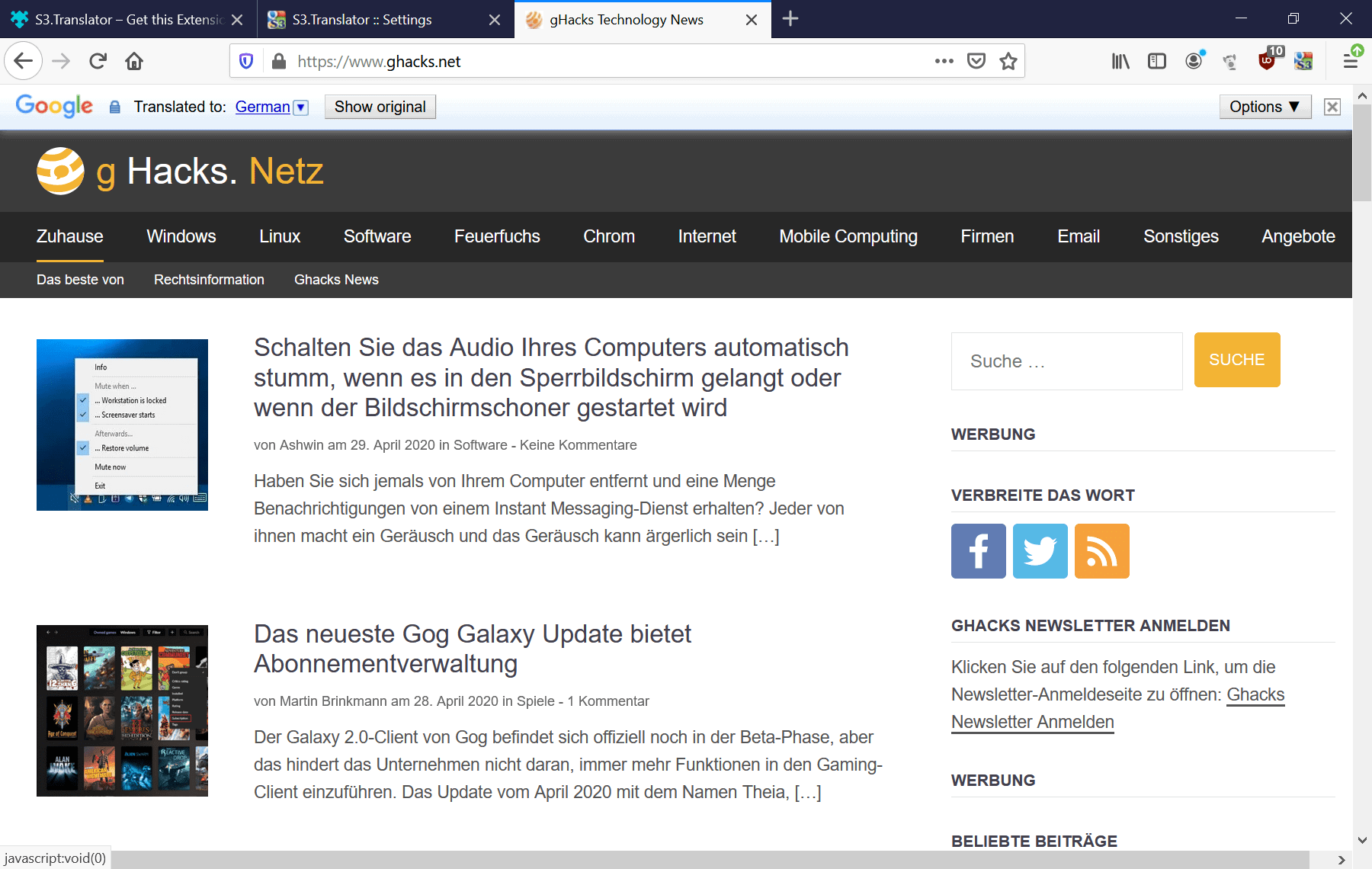 S3.Translator may be used to translate the entire page or a selection, content from the Clipboard, and content that you enter directly so that the entered word or phrase is translated.

Now You: which translate service to do you use and why?

Previous Post: « View thumbnails of your tabs and organize them with Panorama Tab Groups for Firefox
Next Post: Firefox 77 won't connect to non-domain address bar entries with periods anymore (will search instead) »