Malwarebytes Privacy is a "next-gen VPN" according to the announcement on the company blog that "helps protect your privacy and your personal information when you go online". The company claims that the VPN is "much faster than traditional VPNs", does not slow down devices and uses less battery on portable devices.

Malwarebytes states that its VPN service does not collected user logs or Telemetry data and that user data remains private, even from the company itself.

As far as basic information is concerned, Malwarebytes Privacy is only available for Windows 7 and newer versions of Windows at the time of writing. Malwarebytes is working on clients for Apple Macintosh, Apple iOS, Google Android, and Chrome devices but did not reveal when it plans to release the clients. 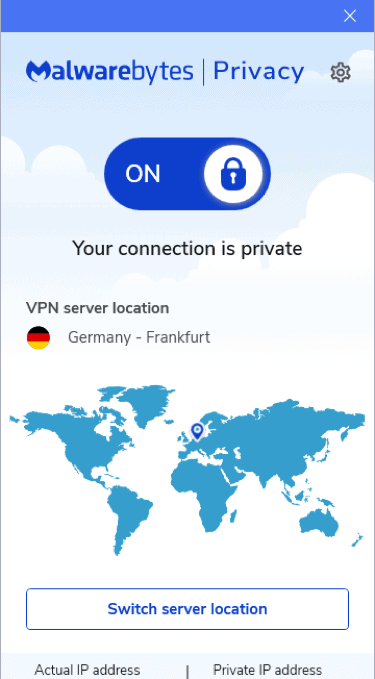 Interested users may sign up for €49.99 per year and use the VPN on up to five devices. A trial option is not available at the time of writing and the product page lacks vital information that users interested in the service may need to make a buying decision.

Information that is missing includes the number of supported locations and servers, confirmation that bandwidth/traffic is not restricted, details about the technical implementation other than that 256-bit AES encryption is used, and more.

The settings provided in the client are bare-bones at the time. You get auto-launch and auto-connection options, but that is it. The program lacks advanced features such as a kill switch, custom DNS settings, additional protections, e.g. blocking of known malware hosts, and others.

I was not able to test the service because there is no trial option available; Malwarebytes claims that its VPN performs better than competing services needs to be put to the test.

Right now, it looks like a hasty release even if tests verify the claims as the client is rather bare-bones and only available for Windows.

The company should consider launching a trial option for users interested in the service as some may want to test its performance before they make a buying decision.

The price is right there in the middle at the time of writing. It is not the cheapest option but also not the most expensive.

Compared to top of the class VPN services, it is lacking in many regards currently. Most obvious is the lacking of clients for mobile devices and other operating systems but there are others, including no option to configure the service without using the client and a lack of options in the clients.

Malwarebytes is not the only company that launched a VPN product this year. Cloudflare launched its Warp VPN last year for mobile devices and Mozilla launched Firefox Private Network VPN as well.

Now You: What is your take on Malwarebytes Privacy? Which VPN service do you use currently, and why?

Martin Brinkmann is a journalist from Germany who founded Ghacks Technology News Back in 2005. He is passionate about all things tech and knows the Internet and computers like the back of his hand. You can follow Martin on Facebook or Twitter
View all posts by Martin Brinkmann →
Previous Post: « Vivaldi 3.0 with adblocker and tracker blocker released
Next Post: How to enable quiet notification requests in the new Microsoft Edge browser »