Feed Preview is a Firefox add-on that indicates available RSS and Atom feeds to the user and may also render previews of feeds directly in the browser.

Mozilla removed RSS preview options in Firefox 64 because it had an "outsized maintenance and security impact relative to" usage numbers. The removal impacted RSS feeds and live bookmarks alike; Firefox users could install extensions like Livemarks to restore functionality in the browser. Feed Preview is a browser extension for current versions of Firefox that integrates feed indicators and previews in the browser again.

Current versions of Firefox don't indicate RSS news feeds to users of the browser anymore. That is a problem for Firefox users who use RSS; while it is still possible to detect RSS feeds manually, either when a site lists RSS as an option or by looking in the code, it is not as comfortable as a function that does so automatically.

Feed Preview adds the classic RSS icon to the Firefox address bar again when it detects RSS or Atom feeds on the active page.

A click on the icon displays all available feeds. Each feed is listed with its type, e.g. RSS, and name. The extension lists the two available main feeds here on Ghacks when you click on the icon when the homepage is active.  You get different feed options depending on the active page; categories and tags have their own feeds that you may subscribe to.

A click on one of the supported feeds opens it as a preview in a new tab in the Firefox browser. The preview looks clean and elegant, and you may use it to verify that it works properly. 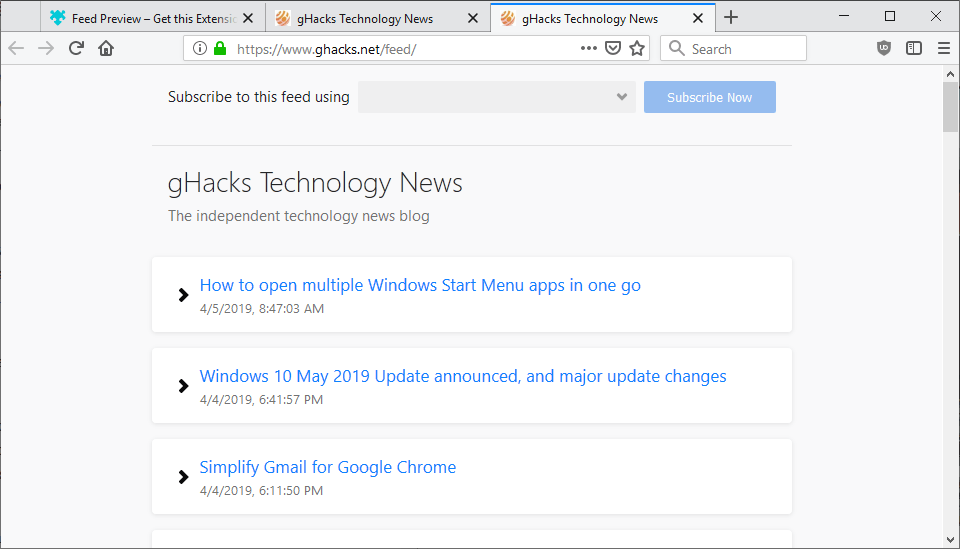 An option to subscribe to the feed is provided at the top but it works only if a RSS feed reader is registered. Feed Preview supports several online feed readers such as Feedly, FlowReader, InoReader, or The Old Reader by default.

You may still copy the feed URL manually to include it in your RSS feed reader of choice, e.g. when you are using a desktop feed reader like QuiteRSS and not an online feed reader.

Feed Preview adds two main (and missing) features to Firefox: the discovery of RSS feeds on websites you visit and options to preview these feeds directly in the browser.

Whether that is enough to give it a try depends on whether you use RSS feeds. I like the discoverability part of the extension as it highlights available RSS feeds on load directly. Makes it easier to copy the feed URL especially if a site does not list RSS feed links on its pages.

Now You: Do you use RSS feed readers?

Previous Post: « Prevent Amazon tracking with Amazon Container for Firefox
Next Post: How to change the Firefox interface language »