Mozilla plans to extend the functionality of Firefox Monitor by displaying breach alerts to users of the browser.

The organization ran a Shield Study back in 2018 to test Firefox Monitor in the desktop version of the browser. The feature was passive at that time; users could check whether an account -- email address -- was found on hacked passwords lists, and they could sign up to receive alerts when a particular account was discovered on new leaked lists.

Firefox Monitor uses the Have I Been Pwned service but implemented the feature in a way that the full email address is never shared with third-parties.

Mozilla started to work on a breach warning system in Firefox in 2017. If things go as planned, Firefox 67 may be the first stable version of the Firefox web browser to warn users when they visit recently hacked websites. 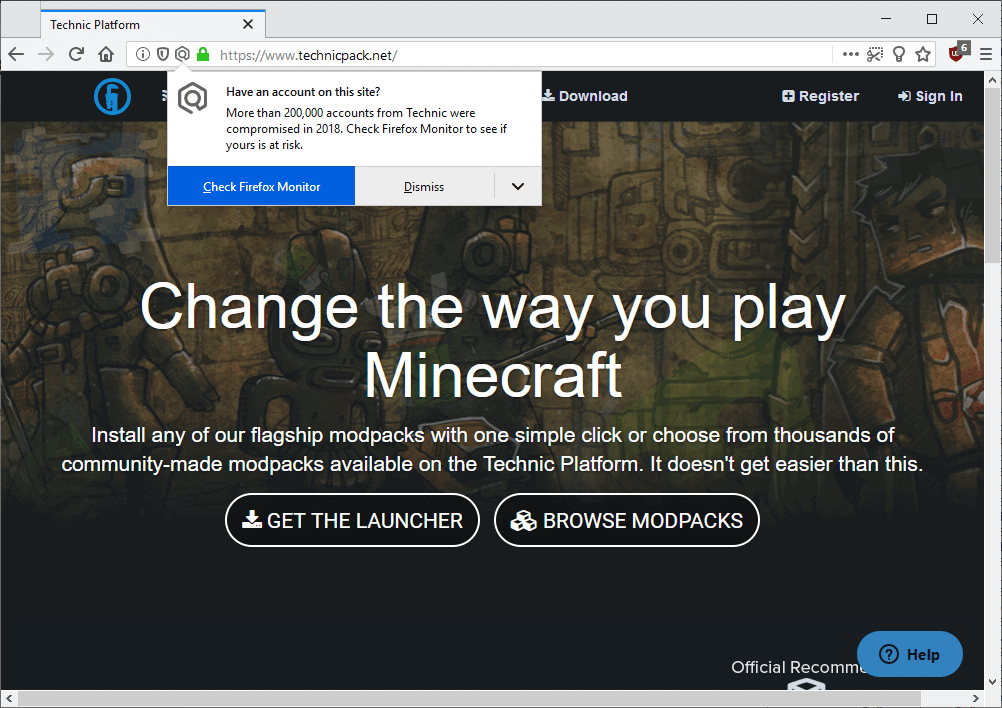 Note: The feature is in development currently. It is possible that the release gets delayed or that functionality changes during development.

Firefox displays the alert on the first connect to a site that was hacked in the past. The notification displays information about the breach and displays an option to check an account with Firefox Monitor.

Mozilla landed the feature in Firefox Nightly recently. Firefox Nightly, currently at version 67, is the cutting edge development channel of Firefox. New features land in Nightly first before they find they way into Beta and Release channel versions.

It is necessary to enable the feature before it becomes available.

Firefox displays a breach alert when you visit a site that suffered from a breach in the past 12 months. Firefox displays the notification and it is up to you to use Firefox Monitor to check your accounts or dismiss it.

If you select dismiss, you get an option to turn the feature off entirely.

Firefox remembers that it displayed a breach notification and won't show it again unless you visit a site that was hacked in the past two months.

Mozilla does not want to cause notification fatigue by displaying lots of breach warnings to users. Another reason for that decision is that the action that users may take is always the same.

A click on the Check Firefox Monitor button opens the Firefox Monitor website. It lists information about that particular breach but the checking options are identical: type an email address to check it for hits in breaches.

Now You: Do you find Firefox Monitor useful? (via Techdows, thanks James)

Martin Brinkmann is a journalist from Germany who founded Ghacks Technology News Back in 2005. He is passionate about all things tech and knows the Internet and computers like the back of his hand. You can follow Martin on Facebook or Twitter
View all posts by Martin Brinkmann →
Previous Post: « Mozilla working on Firefox Picture in Picture mode
Next Post: A first look at Firefox's updated Add-ons Manager »