Microsoft has had a very bad streak in regards to updates for the company's flagship products Windows 10 and Microsoft Office.

After the October 2018 Update fiasco -- the company had to pull the feature update days after release and re-released after six weeks of silence again -- it is now Office that is plagued by updates that cause issues when they are installed.

Microsoft released non-security updates for Microsoft Office 2010, 2013 and 2016 on the first Tuesday of the month (November 2018). We covered the release as we always do, and noticed that some of the released updates were pulled by Microsoft. 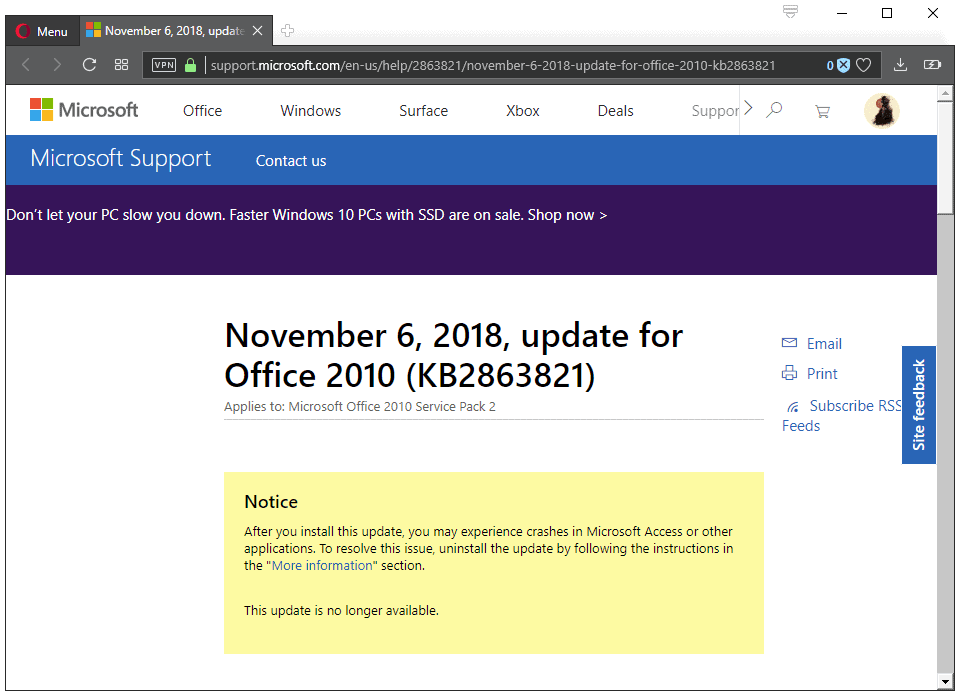 If you check KB4461522 and KB2863821 for Microsoft Office 2010 on the Microsoft Support site, you will notice that Microsoft pulled these updates and recommends that administrators remove the updates if already installed from Windows systems.

After you install this update, you may experience crashes in Microsoft Access or other applications. To resolve this issue, uninstall the update by following the instructions in the "More information" section.

This update is no longer available.

Microsoft explains that the update may cause crashes in Microsoft Access or other (Office) applications. Instructions to remove the updates if installed are provided on the support pages; basically, what you need to do is open the list of installed updates on the Windows PC, find the two patches that Microsoft suggests to remove to uninstall them.

The issue is not the only one that may affect Office 2010 installations. Microsoft published a support article on the Office website that highlights a crash in Outlook 2010 after installing the security update KB4461529 for Outlook 2010 which the company released on November 13, 2010 on Patch Tuesday.

The update fixes four security vulnerabilities, all rated with the severity level of important, in Outlook 2010. The issue itself affects 64-bit installations of Outlook 2010 only.

After updating Outlook 2010 to the November 2018 Public Update KB 4461529 Outlook crashes or closes suddenly on start up. The issue only affects 64-bit installations of Outlook 2010.

The issue is under investigation currently; Microsoft does not recommend that the update is removed from affected systems and suggests that users use Outlook Web Access instead as a workaround until the issue is resolved.

Microsoft revealed recently that update quality was better than ever for the Windows 10 operating system.

Martin Brinkmann is a journalist from Germany who founded Ghacks Technology News Back in 2005. He is passionate about all things tech and knows the Internet and computers like the back of his hand. You can follow Martin on Facebook or Twitter
View all posts by Martin Brinkmann →
Previous Post: « Is Microsoft making an effort to improve update transparency and quality?
Next Post: Microsoft Windows Security Updates December 2018 release overview »