The new version of Debian 9.6 is available as a standalone ISO image download and the included update manager that administrators may use to upgrade to the new version.

Debian notes that the new package includes updates but does not "constitute a new version of Debian 9" and that old Debian 9 media remains valid when it comes to running or installing the operating system on devices. 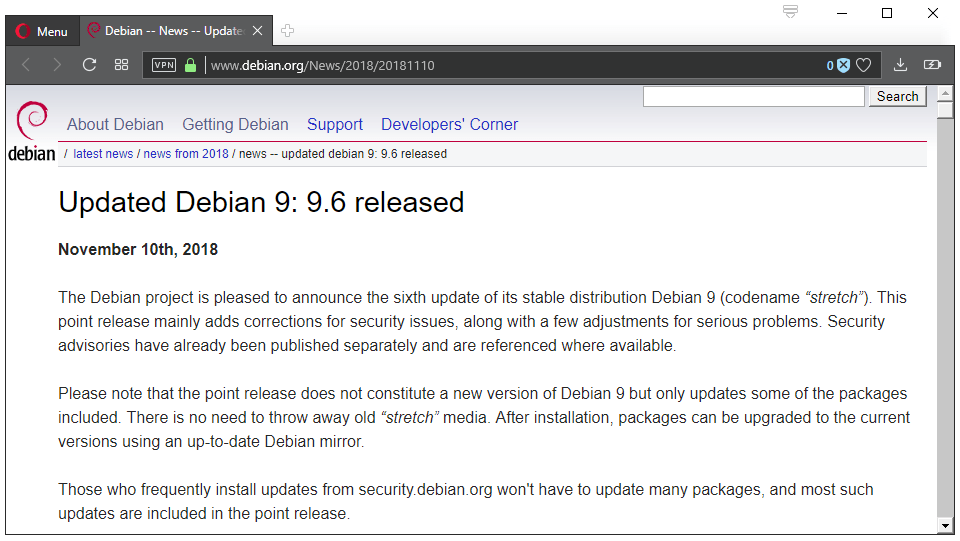 Downloads for all sorts of Debian versions are provided on the official download page on the project website. Users can select to download small or complete installation media, cloud images for online purposes, and there is even an option to buy a set of CDs or DVDs if the Internet connection is not super-fast.

If older Debian 9 media is used, admins are asked to run the update manager so that any missing packages get downloaded from the Internet to update the installation to the latest version. Additional data needs to be downloaded if the small installation ISO image was downloaded and used to set up a new Debian system.

The Debian project is pleased to announce the sixth update of its stable distribution Debian 9 (codename stretch). This point release mainly adds corrections for security issues, along with a few adjustments for serious problems.

The changelog lists a huge number of security updates for various packages included in Debian. Components that include security updates include Firefox ESR, Wireshark, Imagemagick, Thunderbird, Xorg Server, or Curl.

Security updates aside, a large list of packages was updated as well to address issues in earlier versions. While it would go too far to name them all, the list includes Apache2, the debian installer, fuse, grub2, opensc, and rustc.

Debian 9.6 is a security update that brings installation media up to date. Existing Debian installations may be updated using the update manager.