Windows 10 version 1803 is business-ready according to Microsoft

Feature updates may be delayed in those editions of Windows 10 by switching from the consumer-targeting semi-annual targeted channel to the semi-annual channel.

Microsoft released Windows 10 version 1803 on April 30 on its website and through Windows Update which means that the company unlocked the new version of Windows for semi-annual channel distribution less than 3 months after general availability.

Microsoft revealed in a new blog post why it flipped the switch early. The company used AI and machine learning to distribute the feature update to "the best target devices based on [..] extensive listening systems". 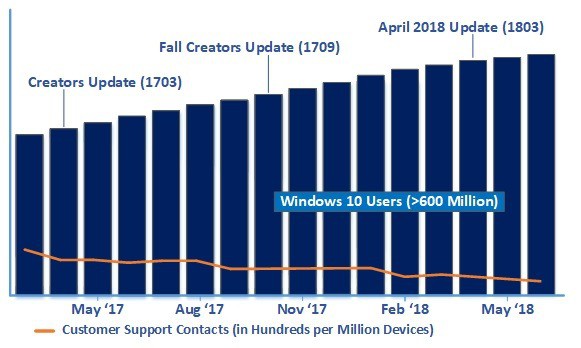 Devices on the semi-annual channel can be configured to delay new feature updates by up to 364 days; this is done in the Settings application under Update & Security > Windows Update > Advanced options.

Admins and users who don't want to install Windows 10 version 1803 yet on their devices need to switch to the semi-annual channel and set a delay for the installation of the new feature update.

Patch Lady Susan Bradley thinks it is too early for release in business environments because of outstanding issues and the release of at least two patches per month for the new version of Windows 10. Our all the issues with Windows 10 version 1803 post released shortly after the release of windows 10 version 1803 is one of the most popular articles ever on the site, and many of the issues described there have not been addressed yet.

If you plan to update to the new version right now you should make sure that you have a system backup in place so that you can restore the previous version without relying on Windows' functionality to do so.

Martin Brinkmann is a journalist from Germany who founded Ghacks Technology News Back in 2005. He is passionate about all things tech and knows the Internet and computers like the back of his hand. You can follow Martin on Facebook or Twitter
View all posts by Martin Brinkmann →
Previous Post: « Protect Windows against Speculative Store Bypass exploits
Next Post: Add WebP support to Microsoft Edge »