The Electronic Frontier Foundation released a new version of Privacy Badger today for Chrome and Firefox that removes link tracking techniques that Facebook uses on its site to track outgoing link activity.

While Facebook knows exactly what its users do when they interact on the site, it would not know nearly as much about links to third-party sites that users interact with if it would not use a technique that is called link shimming.

The main idea behind link shimming is to use a wrapper around the original link so that all activity flows through Facebook servers first before the actual link target is loaded.

Facebook is not the only company that uses link shimming; many major Internet companies including Google or Twitter, use similar techniques.

The screenshot below demonstrates how skimmed links look like on Facebook. The link target is a page on Ghacks, but Facebook wrapped it around its own link target to track user activity. 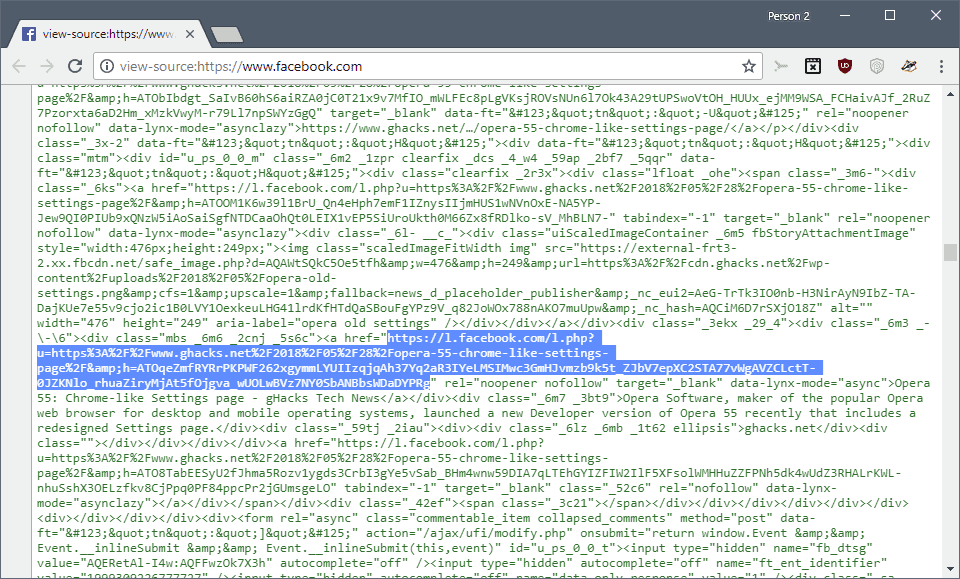 Facebook runs a script on its site that manipulates skimmed links when users interact with those links. When you hover over an external link on Facebook, a script ensures that you see the right link target and not Facebook's link monstrosity.

Whether that is done to provide users with information about a link's destination or to hide the fact that Facebook redirects the link through its own servers is unclear.

The new version of Privacy Badger takes care of skimmed links on Facebook which the company uses to track users. The browser extension removes Facebook's link wrapper and blocks the tracking code; it does so automatically on Facebook and requires no user interaction for that.

The code is based on Facebook Tracking & Ad Removal, a browser extension for Firefox and Google Chrome that blocks tracking on Facebook's site and removes advertisement from Facebook as well.

The new version of Privacy Badger blocks some of Facebook's tracking of third-party links. It should be clear that you cannot prevent all forms of tracking on Facebook if you use the site but that you can limit your exposure.

Privacy Badger blocks some tracking already, from Facebook but also other companies, and the EFF promised to keep on releasing updates for the extension to improve tracking protections further.

Now You: What do you do against online tracking?

Previous Post: « First look at VPNhub
Next Post: Fun facts about GDPR and its effect on the Internet »