Internet users from Germany who try to access the international website of Project Gutenberg, a free ebook repository (and audiobooks),  get a "Your IP address is blocked" message when they attempt to load any page on the site with the exception of the homepage.

Project Gutenberg hosts more than 56,000 free ebooks in various formats. Ebooks are offered in English, Spanish, German and other languages, and are considered free to use in the United States as they are not protected under U.S. copyright law according to the service.

German users may access the homepage of Project Gutenberg but get the "is blocked" message when they attempt to access any subpage on the domain. 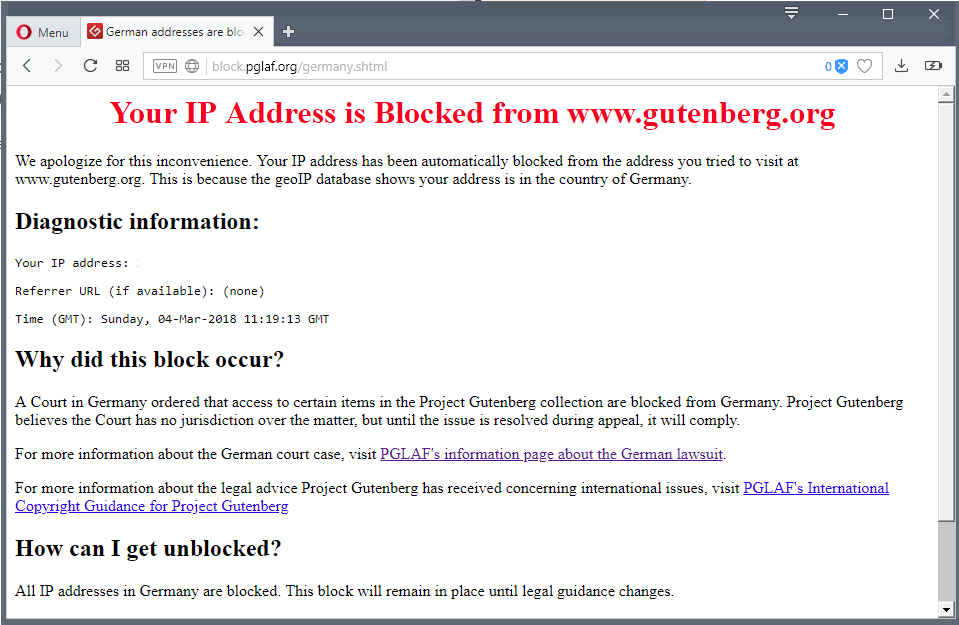 The page informs users that all IP addresses from Germany are blocked because of a German court order. The project's lawyers believe that the "Court has no jurisdiction over the matter" and appealed the decision. Site access is blocked for users from Germany until the issue is resolved.

The lawsuit dates back to December 30, 2015, when Project Gutenberg received notification that a lawsuit was filed in Germany against it. The plaintiff, S. Fischer Verlag, GMBH, demanded that the project block access to 18 ebooks by the three German authors Heinrich Mann, Thomas Mann, and Alfred Döblin or remove the books entirely from the catalog.

The court sided with the plaintiff and ordered that the books had to be removed or made inaccessible from Germany. The court asked for download statistics to assess licensing fees or other fines, and for payment of the court costs.

Project Gutenberg's legal counsel disagrees with the claims and believes that the court overstepped its jurisdiction.

Access to all ebooks and pages from all of Germany was blocked to avoid additional lawsuits, and download records could not be provided because none are kept by the project.

PGLAF's legal advisors disagree with all claims that there must be any blocking, or removal, or anything associated - censorship, fines/fees, disclaimers, etc. - for items that are in the public domain in the US. Period.

Because the German Court has overstepped its jurisdiction, and allowed the world's largest publishing group to bully Project Gutenberg for these 18 books, there is every reason to think that this will keep happening. There are thousands of eBooks in the Project Gutenberg collection that could be subject to similar over-reaching and illigitimate actions.

PGLAF is a small volunteer organization, with no income (it doesn't sell anything), other than donations. There is every reason to fear that this huge corporation, with the backing of the German Court, will continue to take legal action. In fact, at least one other similar complaint arrived in 2017 about different books in the Project Gutenberg collection, from another company in Germany.

Project Gutenberg's focus is to make as much of the world's literature available as possible, to as many people as possible. But it is, and always has been, entirely US-based, and entirely operating within the copyright laws of the US. Blocking Germany, in an effort to forestall further legal actions, seems the best way to protect the organization and retain focus on its mission.

Article Name
Project Gutenberg blocks access from Germany
Description
Internet users from Germany who try to access the international website of Project Gutenberg, a free ebook repository, get a "Your IP address is blocked" message when they attempt to load any page on the site with the exception of the homepage.
Author
Martin Brinkmann
Publisher
Ghacks Technology News
Logo