The friends over on DonationCoder hold an annual software development event called NANY -- New Apps for the New Year -- in which programmers pledge to release programs and apps.

The results of the NANY 2018 event have been published on the DonationCoder forum, and you may head over to the forum to download any app or program from there for free.

I write a summary each year to make this easier for you and as a thank you to DonationCoder as they have a remarkable thing going over there and deserve more attention than they get.

Without further ado the NANY 2018 apps and programs:

ytsearch for Linux is a Youtube search and stream app. 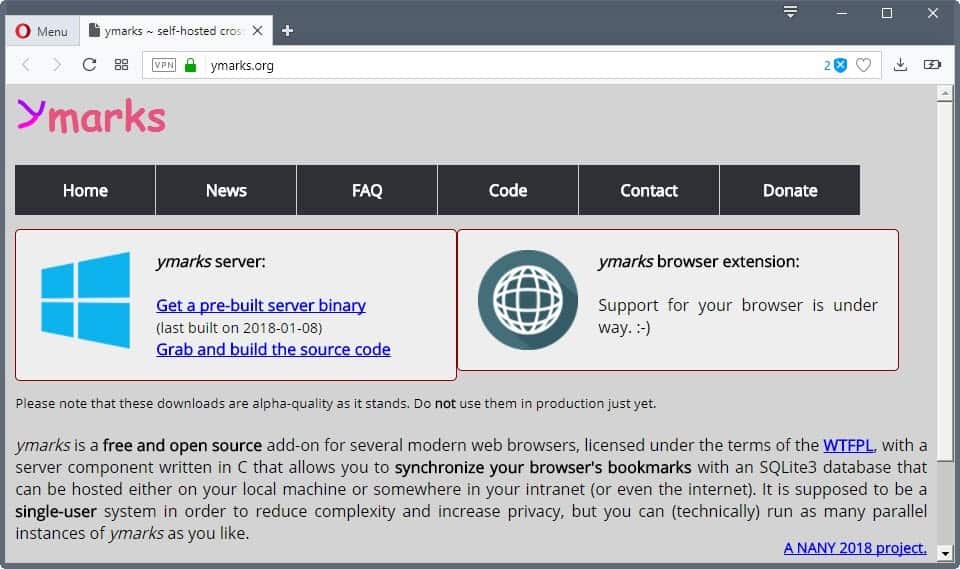 BedPlanner is a Java application designed to plan sleeping arrangements. Designed for Red Cross volunteers, it can match a list of people with locations, rooms or beds.

Cnpaperplay is a set of utilities and pre-made books that reproduce the boardgame Codenames Duet. It comes as a series of PDF files that you need to print to get started. You need two players, a pencil and the printed books to play.

Joomla plugins. A set of plugins for Joomla, e.g., a log viewer or meta info viewer and editor.

twtxtc is a command line client for the twtxt micro-blogging network.

UnClouder, an add-on for Firefox that replaces "the cloud" with "other people's computers".

WordPress plugins. Two plugins for WordPress multisite. One less site admins access their upload folder, the other is an audit log for the plugin WP Security Audit Log.

BaseQuiz challenges you to convert numbers between mathematical bases.

Constant Info displays a list of prioritized items in ticker-style on the screen for use within workgroups.

Ethereum Denomination Converter to convert between denominations of the cryptocurrency Ethereum.

Folder Zip adds convert to zip and convert to folder to the context menu.

Gowser. A gopher browser for Windows.

Multi-Launcher displays recent programs, documents, folders, and webpages so that you can launch them quickly again.

Overlap Wallpaper version 3 displays a photo on the desktop wallpaper. Supports transparency in the latest version.

PlainTasks. A simple task manager productivity app that supports up to three tasks.

Ready Bible Study is a feature-rich program for Bible studies.

Shortcuts Creator is a launcher to launch favorite apps, documents and other things.

Stick A Note (version 3) updates the previously released program. It is a sticky note program that sticks notes to program windows.

SubAHK, a front-end client for the Subsonic media streaming server.

WHAT (Windows Hotkey Activator Tool) maps hotkeys to windows to bring them to the front when you activate the hotkey.

Article Name
DonationCoder NANY 2018 Software releases
Description
The results of the NANY 2018 event have been published on the DonationCoder forum, and you may head over to the forum to download any app or program from there for free.
Author
Martin Brinkmann
Publisher
Ghacks Technology News
Logo