QuickViewer is an ultra-fast image viewer for Microsoft Windows devices that has been designed from the ground up for speed.

Image viewers are a dime a dozen on Windows; while there are plenty to choose from -- like the excellent FastPictureViewer, FastStone Image Viewer, HoneyView or XnView -- all differ when it comes to performance, supported formats, and functionality.

If speed is what you require the most, then you may want to take QuickViewer for a test ride, as it delivers that more than any other image viewer. 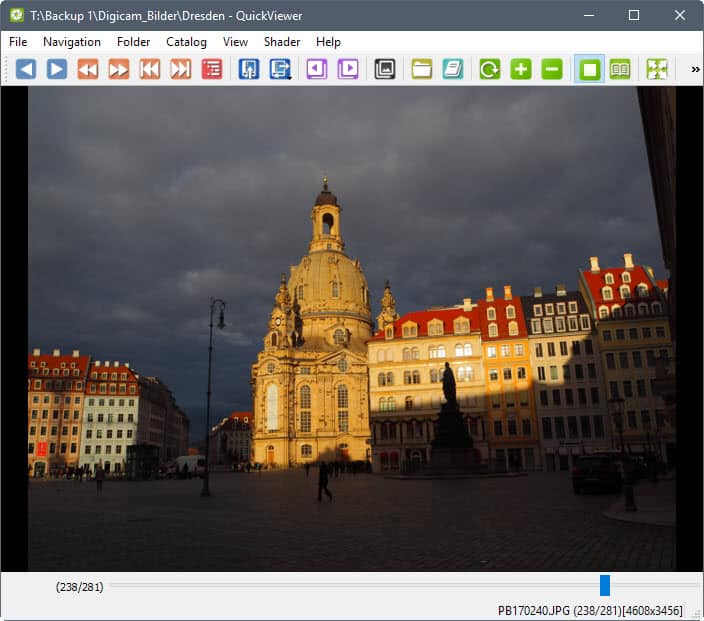 QuickViewer is a portable program for 32-bit and 64-bit versions of Microsoft Windows. You can run the program right after download and extraction of its archive.

As far as support is concerned; QuickViewer supports the image formats bmp/png/jpeg/dds/webp/ico/tga/tiff/gif, the archive formats zip/7z/rar/cbr/cbz, and several RAW digital camera images such as crw, cr2, nef, arw, and dng.

The program supports three main loading options when it comes to images:

Regardless of what you do to load images, QuickViewer loads the first image quickly and without delay. You may use the mouse wheel, keyboard, or icons the program offers to flip through images without any noticeable delay.

To test this with larger images, I loaded a folder with more than 250 images with a resolution of 4608x3456 in QuickViewer. Most other image editors show a slight delay sometimes when I flip through the images fast, not so in QuickViewer as images loaded fine as soon as I flipped to the next or previous image.

You may use the mouse, toolbar buttons or keyboard shortcuts to navigate the image folder that is loaded in the program.

Keyboard support is excellent, and the program even ships with its own KeyConfig tool to add new keyboard shortcuts or change existing ones. 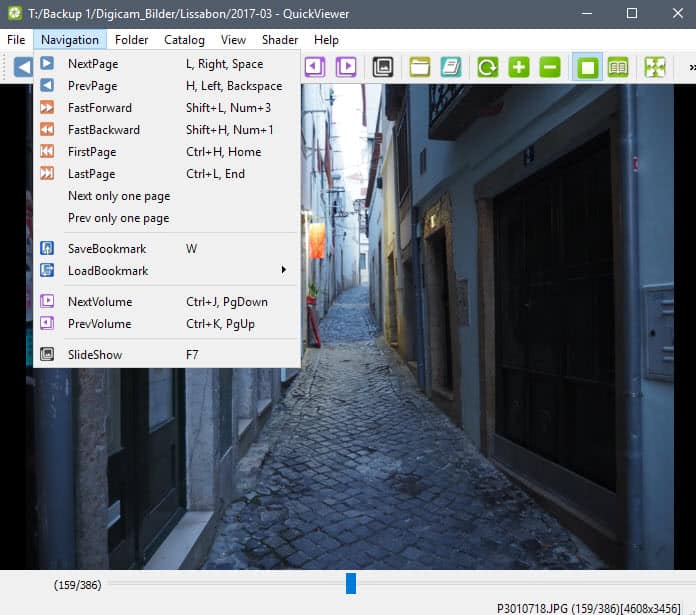 While image viewing is one of the strong features, probably the strongest, of QuickViewer, it does offer more than that.

You can zoom and rotate images, load them in fullscreen mode, copy them to the clipboard, delete them, or bookmark images.

An option to display an image's EXIF information are provided, and so is an option to open it in Explorer.

The image viewer supports spread viewing which helps read comics and manga by displaying two pages next to each other instead of just one.

One interesting feature is the ability to create catalogs. A catalog is a collection of folders that contain images. It works similarly to how libraries work on Windows: it collects files from multiple locations to make them all available in a single catalog.

But a catalog does more than that. It scans the images, creates tags for each, and provides you with search functionality which is near instant as well even if you have added a massive list of folders or archives with images to the application.

QuickViewer ships without options page. Any feature is configured directly in the interface. The interface itself is highly configurable. You can hide toolbars for instance if you don't require them to make more room for the display of images.

While that works well usually, you may notice that some customization options are missing because of that. There is for instance no option to configure the slideshow in any way, for instance by changing the interval.

QuickViewer is a very fast image viewer for Windows; maybe the fastest there is as of today. It is portable, updated regularly by its author, and open source on top of all that.

Now You: Which image viewer do you use, and why?

Martin Brinkmann is a journalist from Germany who founded Ghacks Technology News Back in 2005. He is passionate about all things tech and knows the Internet and computers like the back of his hand. You can follow Martin on Facebook or Twitter
View all posts by Martin Brinkmann →
Previous Post: « SeqBox and BlockHashLoc file recovery tools
Next Post: A first look at IOBit Uninstaller 7 »