TreeSize Free 4.0 is out

TreeSize Free 4.0 is the latest free for personal use version of the popular disk space distribution analysis software for Microsoft Windows devices.

The program tries to answer one simple question: where did all the free disk space go? We reviewed TreeSize Free back in 2010 for the first time, and found it to be a powerful program to analyze storage devices in regards to used disk space.

The free version of TreeSize does not follow the same update schedule as the commercial personal and professional versions. It is the first release in over a year.

Note: One of the changes is that support for Microsoft's Windows XP system has been dropped. Windows XP users cannot use the new version because of that, and need to use the previous version, version 3.4.5 instead. 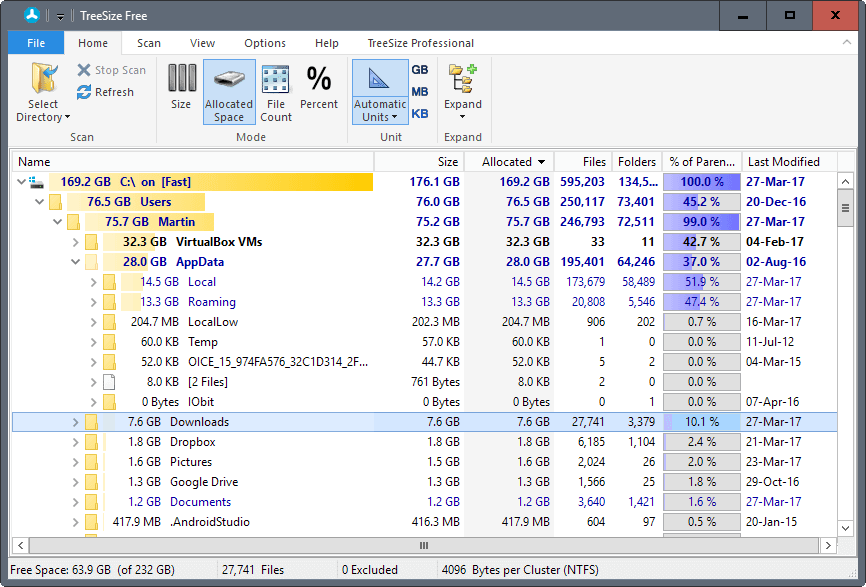 The program interface has changed a bit. The program uses a ribbon interface now known from Microsoft Office, File Explorer on Windows 10, and some other applications.

There is an option to switch to a touch optimized interface under Options > User Interface, but no option to restore the classic interface of the program.

The touch version uses a UWP-style layout. It opens in full screen by default, and displays large buttons and text for easier handling on touch-enabled devices. The version replaces TreeSize Touch which is available on the Windows Store.

The general layout of the data has not changed however. TreeSize Free scans and displays the list of folders and files on the main hard drive on start. The data is sorted from largest to smallest, so that it is rather easy to identify the largest offenders in regards to occupied disk space on the drive.

You simply follow the trail of folders until you reach the file listing. You may speed things up by using the expand option, as it enables you to expand all folders, or only folders up to a certain level from the root folder.

TreeSize Free can scan drives, but accepts any folder as the root location for scans as well. 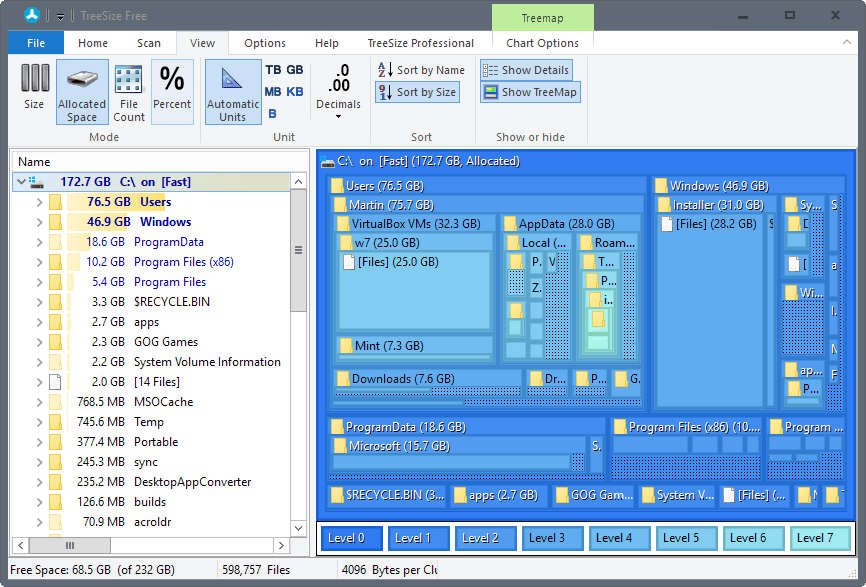 One option that is new in TreeSize Free 4.0 is support for the treemap chart. You enable it by selecting View > Show Treemap.

It adds a new pane to the program interface that visualizes the data distribution on a hierarchical map. Note that you need a bit of space to make good use of the view mode. You may right-click on the selection there to change what is displayed, and to run Explorer commands on the selection.

It is for instance possible to enable file listings as well in the view mode. These options are also available in the chart options tab of the ribbon menu. A double-click on any part of the map loads the files it contains on the left sidebar. The treemap changes automatically when you navigate folders on the left.

What else is new? TreeSize Free support for high DPI displays has improved, and users should notice a better scan performance when they run the program on mobile devices.

TreeSize Free 4.0 is an excellent program that you may use to analyze the disk space distribution of a drive, or folder on a computer running Windows.

Some users may not like the new ribbon interface, but it does not really get into the way this much.

I still prefer WizTree myself as it is faster and better suited for my needs. Still, TreeSize Free is a good alternative that you may want to give a try.

Now You: Do you use a program to analyze disk space?