Unchecky 1.0 is the first stable version of the popular unwanted software blocker for the Microsoft Windows operating system.

It is also the first version released after the program has been acquired by Reason Software.

So-called unwanted programs are a huge issue on Windows. While some are delivered installed on factory fresh PCs, others come bundled with software installers.

The issue is widespread that major Internet companies such as Oracle or Adobe are participating in this by bundling Java or Flash with third-party offers.

The main issue for users is that they may install programs on their computer that they don't want. Worse, these applications may modify system settings, installer browser add-ons, change browser settings, or do other things that users usually don't want and need to recover from once they detect the change. 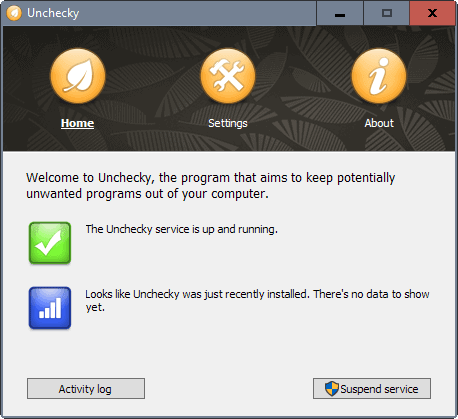 Unchecky 1.0 is the latest version of a program designed to block these third-party installations from taking place.

The program blocks a wide variety of potentially unwanted software, with more being added with every release.

Unchecky handles unwanted software in several ways. First, it unchecks offers in installers automatically to reduce the chance of you not noticing the offer.

Unchecky 1.0 is the program for you if you happen to click next next next during software installations.

While that is useful on its own, it also warns you if you are about to ignore options that will install potentially unwanted software on the PC.

Last but not least, several known services that distributed software modules, opencandy for instance, are blocked in the Windows hosts file.

It is still a good idea to check the installation dialog to make sure every bit of unwanted software has been disabled even with Unchecky running in the background. The main reason for this is that Unchecky uses a database of known installers and offers, and will take care only of those.

Unchecky ships with a couple of options included. You may disable warning tooltips and the notification area icon in the general settings. A click on advanced settings enables you to turn off auto-updating, and to disable use of the hosts file by the program.

Unchecky 1.0 is stable enough for every day use according to the release notes. While it ran stable whenever I used it, that's reassuring to know.

Now You: Do you run Unchecky?

Previous Post: « Bandizip 6.0 First Look
Next Post: Do you Uninstall or Keep Software that you no longer use? »