VDesk is a free, open source, program for the Windows 10 operating system that extends a system's virtual desktop functionality.

The concept is not new and has been part of many Linux distributions for years. Microsoft released a program for Windows XP back then that added virtual desktop functionality to the operating system.

Virtual desktops work similar to using multiple displays but with the difference that only one virtual desktop is visible at a time.

Programs can be moved around between desktops, but there is no option to configure Windows to open programs on virtual desktops (all the time) when they are started. 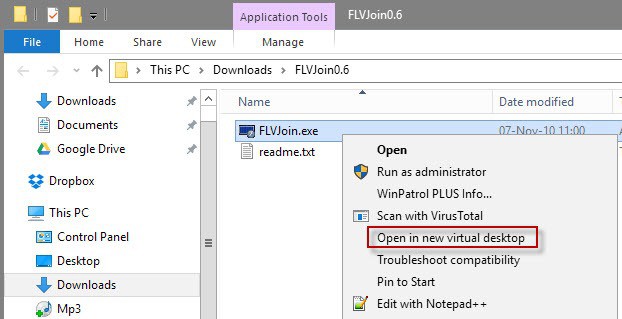 Vdesk is a portable program for Windows that adds the feature to Windows 10. It is a command line program but ships with an option to integrate its functionality in File Explorer.

The main command looks like this: vdesk [n] [command [args]]

So, on:n is used to specify the virtual desktop n, and run: specifies the program that you want to run.

The developer of Vdesk made a demo video that showcases the functionality of the program.

Vdesk extends the virtual desktop functionality on Windows 10 by adding options to the operating system to launch programs on specific desktops.

Now You: Do you make use of virtual desktops?