Google software engineer Steve Kobes announced yesterday that the company is about to enable smooth scrolling in Google Chrome on Windows and Linux.

This resolves one of the longest standing feature requests for the Chrome web browser dating back to September 3, 2008.

Google Chrome users on non-Mac devices had little recourse previously but to rely on extensions such as Chromium Wheel Smooth Scroller or Smooth Key Scroll to improve the scrolling behavior of the web browser.

While those improved the scrolling usually, they all had drawbacks like disabling threaded scrolling because of their reliance on wheel event handlers.

Some websites and services even implemented smooth scrolling on the server side for Chrome web browsers by scanning user agents but that led to bugs as well.

Google plans to enable smooth scrolling in Chrome 49 on all supported platforms with the exception of Mac Os X. 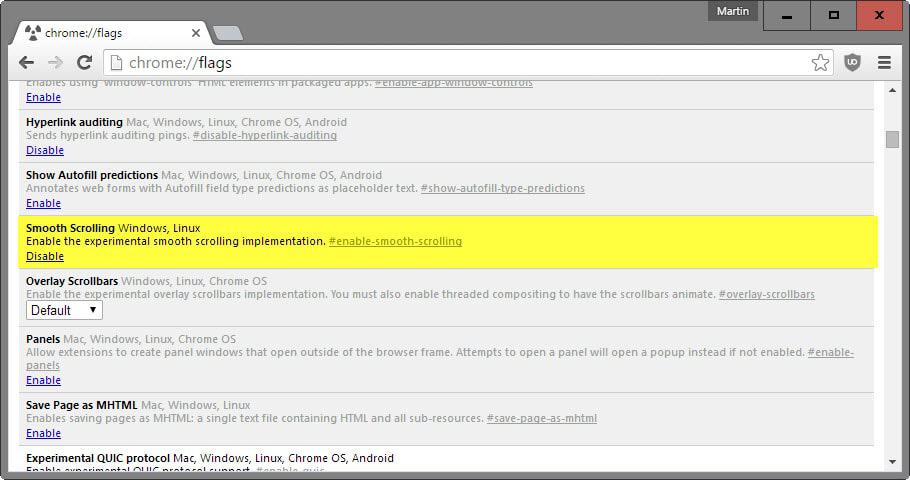 The reason why Mac OS X versions of the browser are not covered is simple: smooth scrolling for Mac devices has already launched and been available for some time.

Chrome users not yet on version 49 of the browser may enable the feature in the following way before it launches officially:

Smooth scrolling is enabled in Chrome afterwards. You may flip the preference again at any time to disable the feature which can be useful if you notice issues after enabling it. It can also be of assistance when Google enables the feature by default, as it allows you to disable it again using the flag.

Please note that Google may remove the preference in the future.

Smooth scrolling affects scrolling behavior with the mouse or keyboard. It is not applied to input gestures, and won't resolve "browser jank" caused by performance issues.

In other news, Mozilla improved scrolling in the Firefox web browser recently as well by enabling APZ.

Now You: Do you notice a difference after enabling the feature?

Martin Brinkmann is a journalist from Germany who founded Ghacks Technology News Back in 2005. He is passionate about all things tech and knows the Internet and computers like the back of his hand. You can follow Martin on Facebook or Twitter
View all posts by Martin Brinkmann →
Previous Post: « Chrome: Failed - Virus Detected troubleshooting
Next Post: Project Eraser: reduce Google Chrome complexity »