Microsoft modified how system tray controls such as Volume work in recent builds of Windows 10.

While the company is not finished yet with the update, the design itself is final which means that Windows 10 will ship with those new controls and not the old ones.

While it is possible to access and restore the old controls currently, it is possible that Microsoft will remove that option from Windows 10 before the final version of the operating system ships.

The company has not confirmed or denied this yet, which means that there is a chance that it takes more clicks to access program-specific volume controls in Windows 10 final.

Currently though, you may create a new key in the Windows Registry to get the old volume controls back in Windows 10: 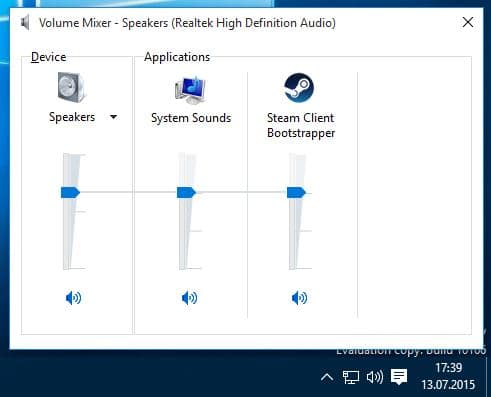 To disable it again, delete the Dword that you have created and restart the PC.

If you like the new controls, you may have noticed that they lack support for program-specific controls currently.

That's where the free program Ear Trumpet comes into play (via Deskmodder). The open source program adds the missing controls to Windows 10 so that access to program-specific volume controls are supported by the operating system again.

Please note that the controls are added through a third-party program which runs in the background while you use the operating system. To access them, you need to click on the program's system tray icon.

While that may work for some Windows 10 users, it may be overkill for others.

You may open the volume mixer in recent builds of Windows 10 without manipulating the Registry or installing third-party programs. The core difference to previous versions of Windows 10 and previous Windows versions is that it takes more clicks to open it.

A right-click on the volume icon and the selection of Volume Mixer displays it again so that you can control the volume of running programs in Windows 10 individually.

This looks identical to the old Volume Mixer which you can still enable permanently with the Registry fix described above.

One additional click to access the volume mixer may not look like much for most users, but it adds another step to the process for users who use it regularly to control the volume of specific programs in Windows 10.

Previous Post: « Wallpapers Bot brings thousands of wallpapers to your system
Next Post: Questions Microsoft needs to answer before the Windows 10 launch »