Why I won't upgrade Windows 7 to Windows 10 (but Windows 8) - gHacks Tech News
ghacks.net

The upgrade to Windows 10 of an existing Windows 7 system looks like a good deal on paper. You don't pay a dime for it if you upgrade in the first year after release, and it remains free afterwards.

While there is no direct need to leave Windows 7 at this point in time as it will receive security updates until 2020, doing so adds a couple of extra years of support before the operating system needs to be switched again.

Windows 10 on top of that ships with several new technologies plus everything that went into Windows 8 including the new DirectX 12, a new Internet browser, improved security or Cortana, the digital assistant.

Why then won't I upgrade my Windows 7 system to Windows 10? The short answer is that I see no need for it. But, there is a longer answer as well.

When Windows 8 launched, I decided against upgrading the system as it felt like Microsoft left desktop users standing in the dust with it. Especially the two-tiered interface was a problem back then.

Windows 10 does away with that interface by bringing Modern Apps to the desktop. That's great as you don't have to switch between different interfaces anymore, for instance when you search for files or programs on the system or want to launch a Modern App.

The start menu is back as well but that was not really an issue for me as it was easy enough to install a third-party program like Classic Shell to bring the old Start Menu back. 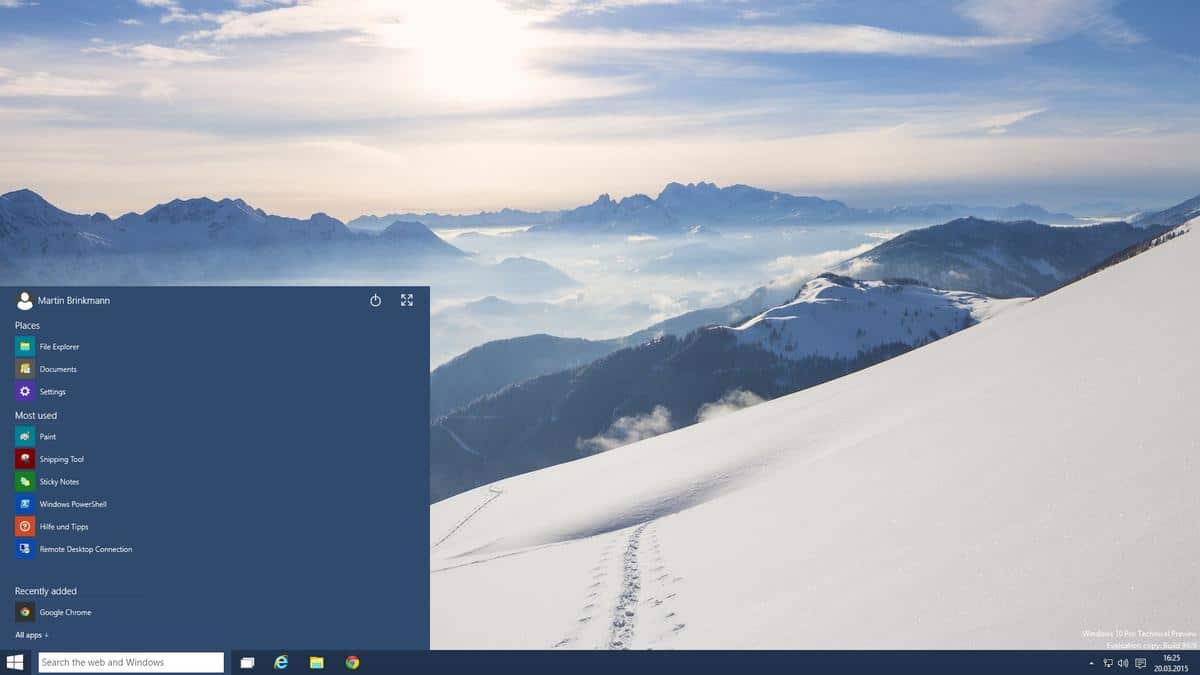 The new start menu has its issues on the other hand. It was previously possible to remove all Modern apps from it so that the area these apps were displayed in was removed to leave regular items that you work with. This apparently has been removed by Microsoft in a recent build. While you can still remove all Modern apps from the start menu, the area remains as it is which means you end up with a blank area there.

It still feels like a massive effort to get people to use Modern apps and Windows Store, and was probably the core reason why all versions of Windows 8 shipped with the Metro interface.

Traces of the old interface are still there however. While Microsoft got rid of the awful Charms bar, it still clings to shipping Windows 10 with PC Settings and a Control Panel. It makes absolutely no sense to use two different areas to control all settings of your PC. I don't really mind using PC Settings even though it takes some adjustment to get used to its layout and finding your way around it. But having to guess where you find a specific setting is all but productive.

If Windows 10 would ship with a feature that I'd really want to use, I'd be the first to upgrade. But this particular PC is not used for gaming (so DirectX 12 does not matter). I have no plans to use Cortana ever even though I can see it being one of the reasons why many users would want to switch to Windows 10.

This leaves security improvements and while those are certainly interesting, I never had any issues security-wise while running Windows 7 thanks to third-party software and using common sense. While extra security would certainly be beneficial, I dislike the idea of upgrading an existing working operating system just for that.

Upgrades are work intensive. You need to backup your files first before you start it. Then it takes hours to complete after which you check if all files and programs are still there. If they are, you still need to configure the new operating system to your liking.

Considering that Windows 7 runs just fine as it is and that Windows 10 has nothing to offer that would improve how I work on the computer, I see no reason to upgrade to it.

With that said, Windows 10 looks to be an improvement over Windows 8.1. My second PC runs Windows 8.1 currently and while Microsoft made that operating system better for desktop users, I find it quite lacking.

I'll upgrade my Windows 8.1 system which I use mostly for gaming to Windows 10 once it comes out. I will benefit from DirectX 12 as soon as drivers and games take advantage of it. It is unlikely that it will be as dead from the start as Vista's DirectX 10 thanks to Microsoft's free upgrade offer but it may still take considerable time before critical mass is reached.

As a Windows 8.1 user on the desktop, there is little reason not to upgrade to Windows 10. While you still end up with features that you may not want, most of them have already been in Windows 8.1 as well with the notable exception of Cortana.

There is no interface switching anymore and it is still possible to install a third-party start menu for extra comfort.

All in all, it is fair to say that Windows 10 is the better Windows 8.1 in most if not all aspects.

I find it difficult to estimate how many Windows 7 users will take Microsoft up on the offer. Windows 7 will see a drop in usage share after the release of Windows 10, there is little doubt about that. The question however is how big of a drop it will be.

Now You: What are your plans in regards to Windows 10?

Martin Brinkmann is a journalist from Germany who founded Ghacks Technology News Back in 2005. He is passionate about all things tech and knows the Internet and computers like the back of his hand. You can follow Martin on Facebook or Twitter
View all posts by Martin Brinkmann →
Previous Post: « Don't expect too much from Windows 10 Build 10041
Next Post: How to disable specific global hotkeys in Windows »