All you need to know about Steam's Broadcast mode - gHacks Tech News
ghacks.net

All you need to know about Steam's Broadcast mode

Steam is growing and Valve seems to add new features to the gaming client in regular intervals.

The latest addition to Steam is the broadcast mode which enables users to stream and watch games using nothing but the Steam client.

The feature launched in beta yesterday and it will take some time before it lands in the stable version of Steam.

To get it right now, you need to switch from release to beta which you can do with a click on Steam > Settings and on that screen enabling Steam Beta Update under Account > Beta participation.

Once that is out of the way you can browse the available public broadcasts under Community > Broadcasts.

Each cast is listed with the game and player name, the number of viewers, and a screenshot of the game that is being played. 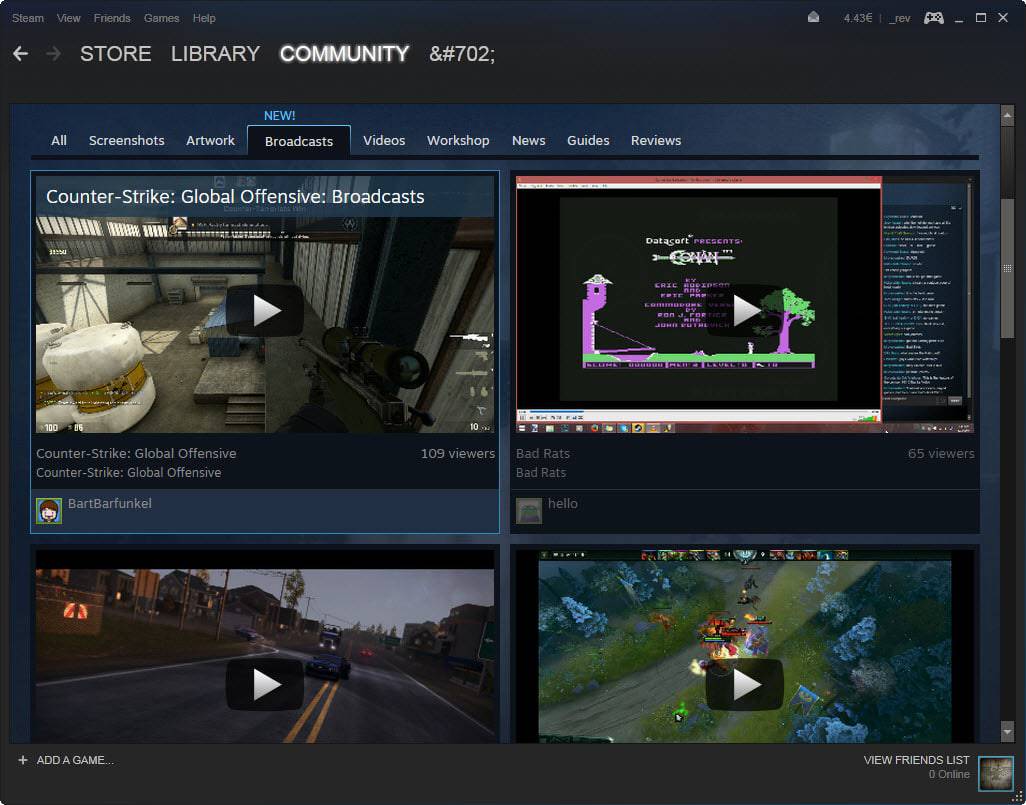 A click on the play button opens the stream window. The video loads and you see a chat interface on the right of it which you can use to communicate with the streamer and other chat participants.

It is possible to watch the stream in fullscreen. You need to hover the mouse over the streaming video and select that option from the menu bar that is displayed when you do so.

If you are broadcasting, you can invite friends to it with a right-click on their name and the selection of "invite to watch" from the context menu.

The following settings are default right now. It is possible that they will change over time though so keep that in mind and let me know if you notice any changes to them:

The new broadcasting menu offers several preferences that you can modify. You can change the video up to 1920x1080 or down to 640x360, and the maximum bitrate to 3500 kbit/s.

There are also options available to record the desktop when you are not in a game, to record and broadcast the microphone, and to show upload stats. 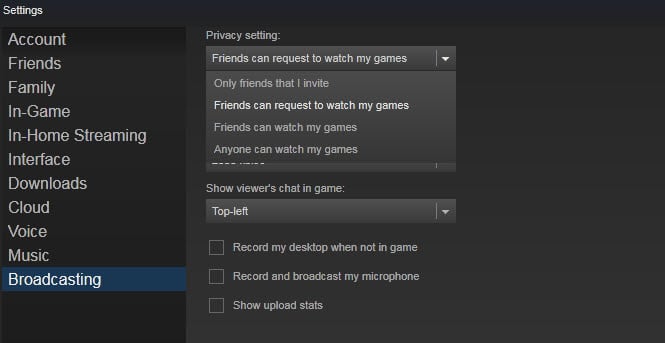 As far as privacy is concerned, the default setting displays a prompt to you whenever a friend wants to watch a broadcast that you are streaming.

You can modify that to make it stricter or less strict. The strictest option is to only allow friends that you invite and on the other tip of the scale it is to allow anyone to watch games (public).

Your game only shows up under Community > Broadcasts if you have set the privacy setting to public.

Steam Broadcasting is currently only available on Windows 7 and Windows 8. Valve plans to add Linux, Vista and OS X support in the future.

Restricted content includes sexual contents, discussions of piracy or hacking, and copyrighted material among other things.

Broadcast unavailable is a message that beta participants may see regularly. Valve is limiting broadcasting capabilities in the beta and the message comes up if there is not enough bandwidth available to serve the request.

Broadcasting is a new feature that is tapping right into the popular game broadcasting market. It is unclear at this point in time if Valve plans to add monetization options to it as well or if it remains a free to watch experience without ads or subscriptions.

If the latter is the case it won't really affect Twitch's bottom line but if Valve plans to add monetization options, it could very well do just that.

Now You: What's your take on game broadcasting in general?

Martin Brinkmann is a journalist from Germany who founded Ghacks Technology News Back in 2005. He is passionate about all things tech and knows the Internet and computers like the back of his hand. You can follow Martin on Facebook or Twitter
View all posts by Martin Brinkmann →
Previous Post: « How to play Unity Games offline
Next Post: Dimmdrive: Steam optimized RAM Drive launches »