If you spend time on Twitter regularly, you may know that tweets by users that you don't follow may appear in your timeline.

This is the case when a message gets retweeted by a user that you follow and also when it is promoted (read commercial).

One of the options that you have to cope with this, other than to unfollow users who retweet messages that you don't want in your timeline, is to mute specific users on Twitter.

Muting ensures that their tweets won't be listed in your timeline. That's great if a user who you follow retweets messages from users that you don't like or care about regularly for example.

Muting won't block commercial tweets on the other hand and the only thing you can do here is to block an account instead. Blocking is stricter than muting as it blocks all messages including private messages and prevents that you are followed by that account.

Twitter up until now did not make available a central interface to deal with accounts that you have muted. Since there was no page that listed all muted accounts, it was somewhat difficult to unmute accounts or perform other actions such as unfollowing them.

A recent update has integrated a new muted accounts management page on Twitter which you can use for that purpose. Note that the new page only lists muted accounts and not blocked ones. 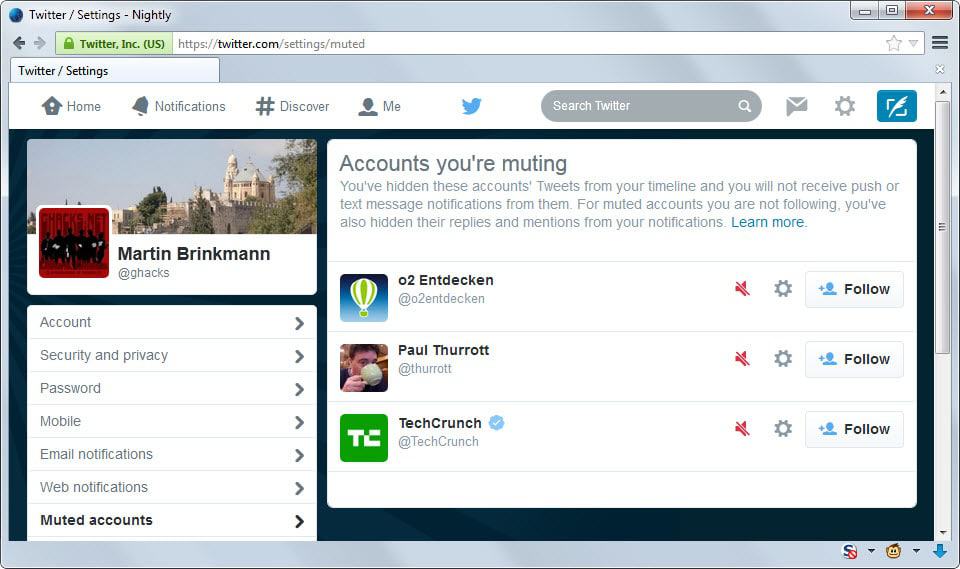 The options on the right of each account provide you with the means to unmute that account, to display other account related options such as blocking or reporting the account, and to either follow or unfollow it depending on its current state.

As far as blocked accounts goes: there is still no option to display those on Twitter directly. There are sites such as Blocked By Me or  Manage Flitter for that purpose. Note though that they are third-party services not associated with Twitter. This may mean among other things that they are limited in terms of API calls they can make.