Firefox 30 released: Find out what is new

Firefox 30 is the new stable version of the web browser that is currently available on Mozilla's FTP server only. The organization pushes new releases to the ftp server first before they are made available on the website and via the browser's automatic updating mechanism.

Some third-party websites may also host the new release early, but unless you want to use a specific feature right away or patch security issues, it is usually the best idea to wait until the release is announced officially by Mozilla.

To check which version of Firefox you are using type about:support into the browser's address bar. Locate the version of the browser under application basics.

Read our Firefox download guide for all information you could possibly need to download the browser to your system.

Firefox 30 is a minor update in terms of functionality that has been added or changed in the browser. This is in stark contrast to Firefox 29 which introduced the Australis interface to the browser.

Lets find out what is new and changed in Firefox 30, shall we?

Most plugins are not activated by default anymore

Mozilla made the decision to block the majority of plugins in Firefox starting with version 30. Blocking does not mean that you won't have access to those anymore, but that they need to be enabled by the user before they can be used on the web.

The only exception to that rule is a list of plugins that Mozilla has whitelisted for now. You can check the full list of whitelisted plugins on this page.

It includes Adobe Flash and several other popular plugins such as Unity, Skype and several McAfee plugins. What you won't find on the list are Java, Google Update, Silverlight or Microsoft Office.

Probably the biggest feature addition of Firefox 30 is support for GStreamer 1.0. Firefox up until now supported GStreamer 0.1 only which, while still supported is being replaced with the newer version which means that many Linux distributions will move over to GStreamer 1.0 eventually (or may have done so already).

GStreamer adds H.264 video as well as mp3 and aac audio support on Linux systems with GStreamer so that contents can be played directly in the web browser.

Mozilla made the decision some time ago to rely on the operating system's capabilities to play some proprietary formats which the organization won't integrate natively in the browser, and GStreamer is that solution on Linux.

Mozilla has added GStreamer in Firefox 24 Nightly on Linux. Back then, you had to enable the gstreamer.enabled preference in about:config to make use of it.

Additional contents, such as social providers or tabs (via third-party add-ons), can be displayed in sidebars in the browser as well.

While only a handful providers support Firefox's Social API, Facebook even removed its implementation again, it is something that Mozilla puts a lot of focus on.

The new sidebar button is available in the customization menu. You can drag and drop it to another location of the browser for easy access.

When clicked on, it displays the available sidebars so that you can open and close them easily using the button.

The following changes affect developers. Check the references at the bottom of the page for full details on all changes.

Quickshare Buttons and the context menu 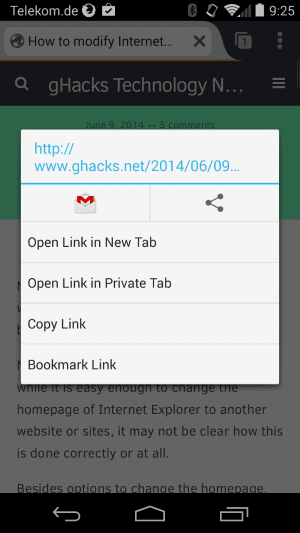 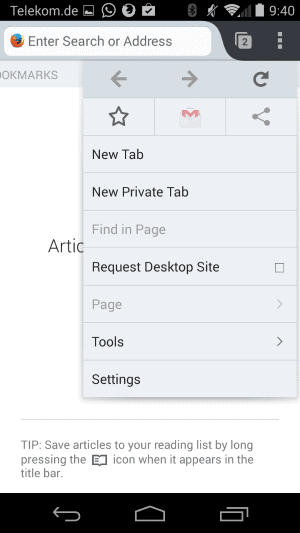 When you long-tap on elements on a web page in Firefox for Android, a context menu is displayed. If you tap on a link, you get options to open it in a new tab for example or share it.

If you select share, a list of services is displayed that you can select one from. You can for instance share the link using Gmail, on Facebook, or send it to a translate service to translate the destination automatically.

Once you have selected a service from that list, it will be displayed in the main context menu as an icon as well so that you can select it faster the next time.

Firefox Hub is a new feature exclusive to the mobile version of the web browser which enables add-on developers to display feeds in a panel on Firefox's home page.

Version one of the Hub launches with Firefox 30 for Android while version two and three are currently on schedule to be released with Firefox 31 and 32 respectively.

Security information are released after the final version of Firefox is out for some time.

Martin Brinkmann is a journalist from Germany who founded Ghacks Technology News Back in 2005. He is passionate about all things tech and knows the Internet and computers like the back of his hand. You can follow Martin on Facebook or Twitter
View all posts by Martin Brinkmann →
Previous Post: « How to change Firefox's automatic update behavior
Next Post: Firebug 2.0 offers a boatload of new features and improvements »