If you are running a nightly channel build of the Firefox web browser currently, and it does not matter if it is the official "with" Australis build, the "without" Australis Holly build, or one of the experimental builds that Mozilla keeps on file at all times, you may have noticed a new folder in your bookmarks.

This Firefox Touch folder appeared out of nowhere there on all operating systems from what I can tell. What makes this even more interesting is the fact that it is a virtual folder, just like the recent bookmarks folder for example, and not a real folder that contains any bookmarks.

Basically, it offers links to bookmarks that are stored elsewhere. When you open it and look at its contents, you may notice that it includes the very same list of bookmarks as the most recent bookmarks folder. The display depends on your operating system though.

The main question in regards to the Firefox Touch folder is why it appeared in the bookmarks. Since it is clearly marked as touch, it does not really make much sense to deploy it on a system that does not support touch.

This leaves Firefox Mobile or Windows 8 as a possible explanation. 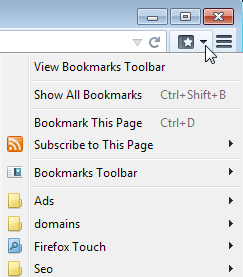 It appears that Firefox Touch has been added as part of Mozilla's efforts to bring the two versions of the Firefox web browser on Windows 8 closer together.

The company noted that bookmarks were not shared between the Metro and Desktop mode of the browser on Windows 8, and that it was too complicated at this point in time to expose desktop bookmarks on the Metro version.

That's why it was decided to expose Metro bookmarks, that is bookmarks that you have created in the Metro version of Firefox on the desktop version through the Firefox Touch folder.

It is possible to put bookmarks in that folder on the desktop to have access to them in the Metro interface.

The main issue with the implementation is that it landed for all supported operating systems. At the very least, Firefox Touch is also available on Windows 7 which I have tested myself.

Mozilla is apparently working on that, and it is likely that Firefox Touch will become exclusive to Windows 8 after all.

For now though, if you are running Nightly, you will have a Firefox Touch bookmarks folder there. For any operating system but Windows 8, that means a folder that is replicating the most recent bookmarks folder.

You can remove the folder easily. Just open the bookmarks manager or the bookmarks on the toolbar, right-click the Firefox Touch folder there, and select delete from the context menu. This removes it from the bookmarks, but leaves all bookmarks that it displayed untouched.