When I tried to start the Firefox web browser today I received two error messages instead of the web browser. It would not start because of this, which left me puzzled for some time.

The first error read "The program can't start because pgort100.DLL is missing from your computer. Try reinstalling the program to fix this problem". The only option was to hit on ok, which caused the second error prompt to appear on the screen.

I'm running Firefox Nightly, the cutting edge version of Firefox which sometimes has issues. It happens rarely, and I never ran into startup issues before when using the browser.

How to fix Couldn't load XPCOM 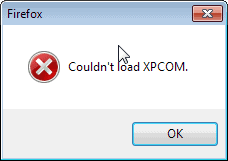 It was very likely that the last update of the browser somehow caused the issue. Either because it was not applied correctly, or because something had not been updated properly.

Whenever I encounter errors surrounding DLL or other loading errors, I restart the PC to see if they go away afterwards. This time though, a restart did not resolve the issue. The could not load issue was still being displayed on the screen.

I then tried to find out more about the dll that was missing: PGORT100.dll. A quick web search revealed that it was part of Microsoft's Visual Studio, the Microsoft Profile Guided Optimization Instrumentation Runtime.

I was not able to locate it on the system. Instead of searching for that file now on the Internet, I made the decision to simply install Firefox anew.

A new installation should add the missing file back to the system, and since it does not touch the profile directory at all -- which contains all the custom data of Firefox like bookmarks, browser extensions or themes -- it should not cause any further issues.

I knew that the issue would not be solved if it was an issue of the latest Nightly build, and not a local issue that only I was experiencing.

Still, it was my best shot. I downloaded the latest Firefox Nightly build and installed it to the same directory that the previous installation was installed in.

I then launched Firefox and lo and behold, the XPCOM error was gone and the browser did start up like usual.

In short, here is what you may want to do:

Note: As I mentioned earlier, this fixes the issue only if the actual Firefox version that Mozilla pushed out is not buggy. If you run Nightly or Beta, chance is that you will receive versions every now and then that have issues. That's to be expected as yo deal with beta and development software.

If you are experiencing pgort100.dll or XPCOM related error messages in Firefox during start, try installing the browser anew.

I still do not know what caused the issue in first place. In my case, the most likely explanation is that the most recent Nightly update somewhat got things messed up so that some files were not updated correctly.

Previous Post: « What's the Firefox Touch entry doing in the Firefox Nightly bookmarks?
Next Post: Firefox 26: Find out what is new »