by Martin Brinkmann on October 10, 2013 in Internet Explorer - 2 comments

Internet Explorer 11 is the newest version of the default system browser of the Windows operating system. It ships with Windows 8.1, the update to Windows 8 that will be released to the public on October 18th, 2013.

While the company has not made any comments on the release date for IE11 on Windows 7, it has made a blocker toolkit for the operating system that system administrators and end users can use to block the automatic deployment of the browser on Windows 7.

This suggests that the final release is near, and confirms that Microsoft will deliver Internet Explorer via the operating system's automatic update feature.

The Blocker Toolkit will only prevent the automatic installation of the browser, but not if the web browser is installed manually by users of the system. 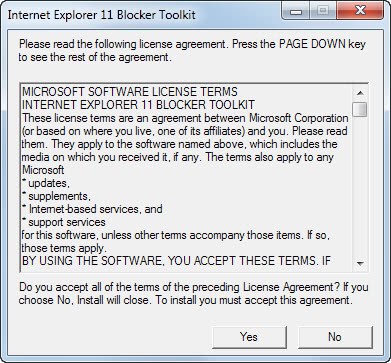 The Internet Explorer 11 Blocker Toolkit can be downloaded from Microsoft's Download Center. It is a 96 Kilobyte executable that displays a license agreement when you run it on a supported operating system.

If you select Yes here, you are asked to select a location on the local system where you want files to be extracted to. This extracts four files to the selected location but that is about it.

Note: Selecting yes and extracting the files does not prevent the installation of Internet Explorer 11 on the system, you need to run the extracted files for that.

When you run the script, it will create a Windows Registry key that prevents the installation of Internet Explorer 11 via Windows Update.

You can create the key manually, or use the script to create it for you.

IE11_Blocker.cmd /B (blocks delivery on the local computer)

IE11_Blocker.cmd MachineName /B (blocks the delivery on the the computer MachineName)

IE11_Blocker.cmd /U (unblocks the delivery on the local machine)

IE11_Blocker.cmd MachineName /U (unblocks the delivery on the computer MachineName)

Note: You need to launch an elevated command prompt to run these commands successfully.

Martin Brinkmann is a journalist from Germany who founded Ghacks Technology News Back in 2005. He is passionate about all things tech and knows the Internet and computers like the back of his hand. You can follow Martin on Facebook or Twitter
View all posts by Martin Brinkmann →
Previous Post: « Internet Explorer spell checker Speckie 6.0 released
Next Post: How to change and add search providers to Internet Explorer 11 »