Google seems to fix and tweak things on YouTube constantly. This not only includes the layout and design of the website, which the company has modified numerous times in the past year, but also under the hood changes for all or only some of the visitors of the video hosting site.

The company has tested a new feature for some time now as part of the experiments that it is running on YouTube. It is changing the way contents are loaded when users witch pages. The common way of handling this is a full page reload, which means that all contents of the new page are loaded from cache or a Google server even if it a content does not change at all.

The new feature keeps element of the interface that are not changing to speed up the page loading time. The HTML5 feature enables web developers to change urls without reloading the entire page. While that is the case, a back-button event is still created so that you can go back to the previous page without issues.

You may have noticed the experiment in all browsers supporting the feature. While Google has tested it in different browsers, it has enabled it only for Chrome users.

If you are using Google Chrome when you are visiting YouTube, you may have noticed that the site displays a red bar underneath the address bar when you switch to new pages on the site, for instance to a new playlist entry. 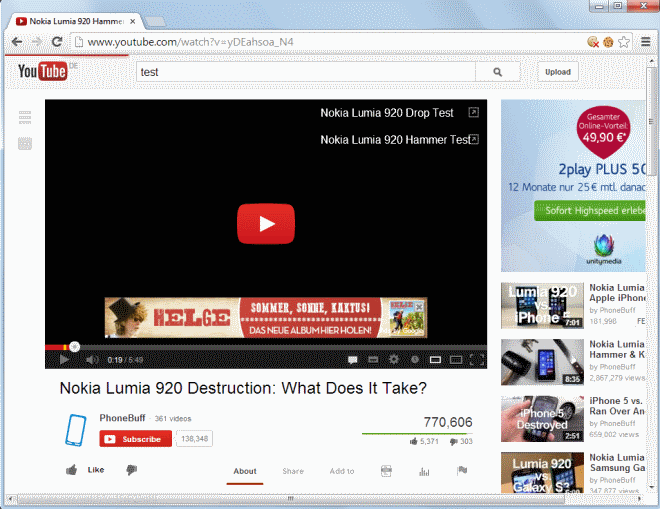 This happens when you click on a suggested video on the right of the video that is currently playing, but not in other instances, for instance when you are using the search form on top to find videos on YouTube.

It feels a bit snappier when that is happening, even though I cannot really say that it is that much faster, at least not on my connection which is fairly fast. If your connection is slow, then you may benefit from this more than I do though.

This feature is only available in Chrome and apparently also in Opera 15 or newer. That does not mean that you cannot get it in your web browser, Firefox hust, right away. You do need to fake the user agent on the other hand which is not really worth it if you are asking me.

Then again, if you really want to give it a try do the following:

The feature may be worth a try if the page loading times that you experience on YouTube feel too long. It is not really something that I can get too excited about on the other hand, but that can probably be attributed to my fast Internet connection. (via Caschy)