The American Racing 2 game looks and plays like a mixture of popular classic racing games such as Outrun and Super Cars. It is a fun arcade racer that offers lots of diversity including challenges and a car that you can work on.

The strategic part of the game displays a race calendar to you that highlights all challenges and championships that you can race. Here you can also visit the garage to spend money that you have earned in races and challenges to make it faster, stronger or improve its aerodynamics.

Controls are easy to learn: you control your car with WASD or the arrow keys, and use the boost or turbo with X or Ctrl. The W and up arrow key accelerates the car, while S or Down use the breaks.

The maps look as if they have been taken right from the classic Outrun game or any other arcade racer of that period. The only difference is that you are racing laps in American Racing 2.

The laps and your position are always highlighted on screen, and the game indicates the position of the car right in front of you as well. One interesting game mechanic is drafting. If you get close enough to another car you benefit from drafting which not only fills your boost but also gives you a slight speed advantage over your opponents car so that you can overtake it easily.

You earn money depending on your performance which you can spend in the garage. Here you can improve the following elements of the car: 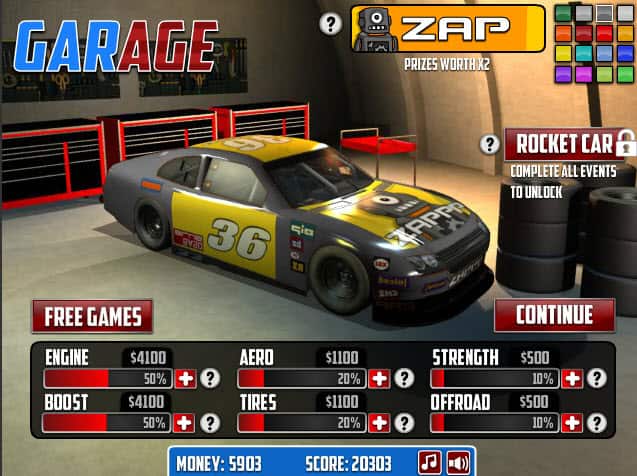 Upgrades become more expensive which is not such a big issue as you earn lots of money while you are racing, at least when you come in first and get the gold medal. You can attract sponsors which provide you with bonus money every time you complete a race.

You need to complete at least one challenge every week before you can race in the championship race of that particular week. Challenges may include a one lap race, hitting a certain amount of cars on the racing track, hitting objects placed on the track or driving slalom around gates. These challenges are sometimes more difficult than the actual championship race.

It makes sense however to complete them all, at least in the beginning as you earn money doing so which you can invest right in your care again.

American Racing is a well designed Flash racing game. While I do think that it is a bit too much on the easy side of things, especially when you race, it is still fun to play through.

The driving mechanics could be more sensitive so that it is more difficult to keep the car on track, and I'd really like to see more rivalry in the game, for instance by highlighting which driver just snagged away first place from you in the last game.

Previous Post: « Check all regional prices on Steam
Next Post: How to raise your Steam level to 10 efficiently »