Google runs many of its products independent from each other. This is the case for Adwords and Search, but also when it comes to storage for services such as Google Drive, Gmail or the social networking service Google Plus.

The company announced today that it will merge the storage of several of its services so that it is shared between them all. What this means? That you now have 15 Gigabyte of storage at your disposal that Gmail, Google Drive and Google+ share. While that is not more than you had access to before in total numbers, considering that you had access to 10 Gigabyte of storage on Gmail and 5 Gigabytes on Google Drive and Google+, some users may benefit from the new unified storage system.

Say your Gmail account neared the 10 Gigabyte mark but you did not really make use of Google Drive or Google+ at all. Previously, all you could do was either backup and delete emails and attachments, or buy additional storage. The same is true now for Google Drive users who use the service heavily but Gmail not as much as they can now use a couple of extra Gigabytes that were previously only available for Gmail use.

Google is making changes to its drive storage service as well. You can use the service to buy additional storage if you need to. 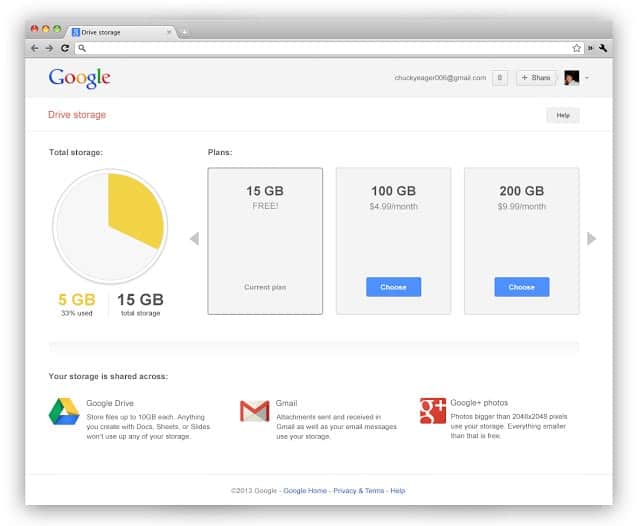 The main change is that Google removed the 25 Gigabyte plan for $2.49 per month from the page. Plans start at $4.99 per month for 100 Gigabyte now. It is not clear if existing users who have bought additional storage are affected by the change, or if they can continue using the plan they signed up for.

One benefit here is that Gmail users can now make use of all storage that is added to the account, and not only 25 Gigabytes like it has been previously.

Google notes that the changes will roll out in the coming weeks, and that Google Apps users will also get shared storage. Google Apps users get 30 Gigabyte of unified storage across the same services with files created in Docs, Sheets or Slides, not counting against that limit. Heavy Gmail users will benefit from the lifting of the 25 Gigabyte storage limit of the service as well.

The majority of Google users should benefit from the move as they have access to the same storage limit as before but are more flexible when it comes to using it.

Martin Brinkmann is a journalist from Germany who founded Ghacks Technology News Back in 2005. He is passionate about all things tech and knows the Internet and computers like the back of his hand. You can follow Martin on Facebook or Twitter
View all posts by Martin Brinkmann →
Previous Post: « Google shuts down SMS Search
Next Post: The new Google+ (May 2013). What you need to know »