BetterDesktopTool adds Mac Expose and Spaces like features to Windows

Microsoft has improved the window handling in the Windows operating system with the release of Windows 7. It added much needed features to place two windows side by side next to each other on the desktop for instance. While that may be sufficient for many users of the system, some may miss advanced features that they may have stumbled upon while using other operating systems.

BetterDesktopTool is a free for personal use application for the Windows operating system that adds several new features to it. The core features that it makes available can be mapped to keyboard shortcuts, the mouse, or hot corners on the system. Before you start configuring those new features though, you need to know that this only works if an Aero theme is being used on the system. A Basic Aero theme or non-Aero theme won't trigger the features.

The following five features are being made available on the Windows & Desktop Overview tab: 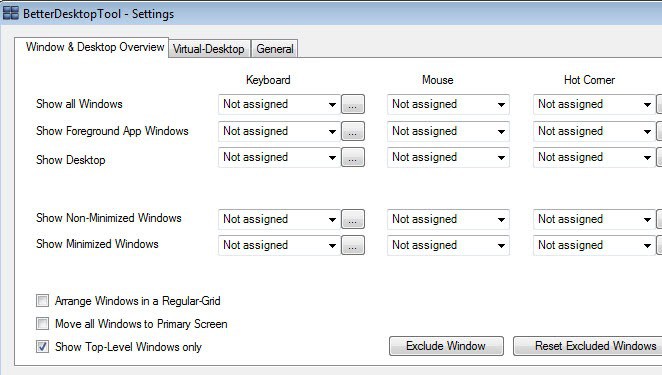 All five features can be mapped to keyboard shortcuts such as Ctrl-Tab or Ctrl-Space, middle- and extra-mouse buttons, or a corner of the screen. 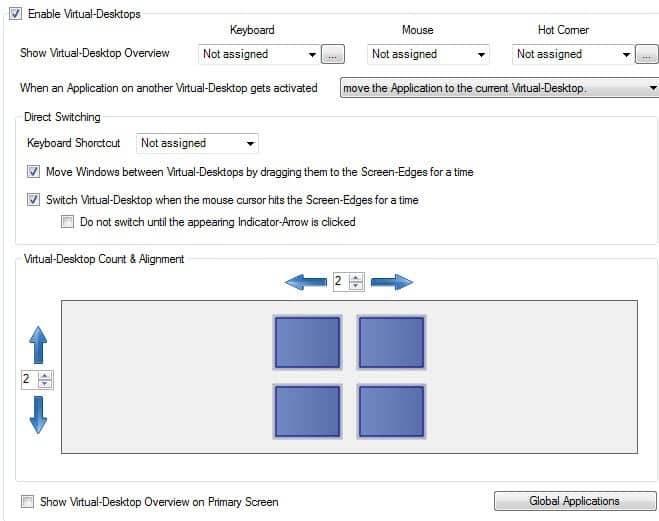 A couple of preferences are available to customize the program further. It will block all shortcuts from working when full screen applications are running for instance.  You can furthermore add windows to a blacklist so that they won't be included in selected operations. If you are using a touch screen you can furthermore enable multi-touch gesture support to use the program's functionality.

BetterDesktopTool is compatible with all versions of Windows from Vista SP2 onwards. It requires the Microsoft .Net Framework 4.0 and Windows Aero Glass.

Previous Post: « Ignition optimizes file collections to fit them on the least amount of discs
Next Post: Windows: change the volume of sound automatically based on the time of day »