Malwarebytes Anti-Malware is one of those programs that every Windows users should have installed on their system. I'm not saying that it should be the primary antivirus software on the system, especially since the free version does not support the real time scanning of objects and files, but that it should be installed as a second-opinion scanner to make sure nothing malicious slips by the resident antivirus program on the system.

The application supports the majority of features one would expect to be supported by an on-demand scanner. You can run a quick scan which checks the memory and critical locations on the system, or a full scan to scan every file and the memory instead.

The scanner ships with its - regularly updated- virus definition database and heuristics module to catch malicious software that has not been added yet to that database. 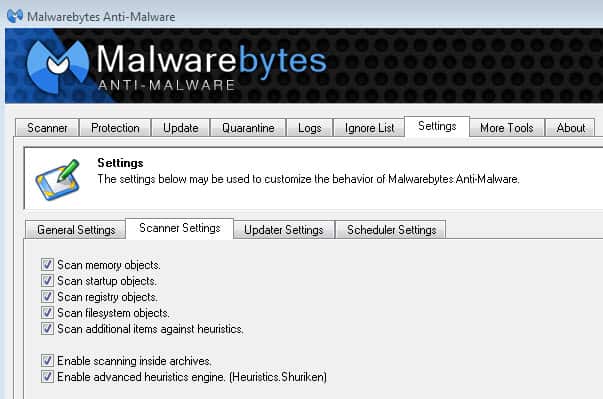 It should be obvious that this is only the case for archives that are not protected by a password or through other means. The program itself does not list the supported archive formats. According to official sources, it supports the scanning of rar, zip, 7z , cab and msi archives, as well as the scanning of the self extracting executable file formats 7z, zip, rar and nsis.

The scanning of archives may slow down the overall scan speed especially if large archives are stored on a storage device that is included in the scan. You can turn off the feature in the Settings under Scanner Settings > Enable scanning inside archives in this case or use the ignore list to add safe archives to that list so that they won't be scanned.

Malwarebytes Anti-Malware should inform you about the update next time you start it up. Just follow the updating procedure to install the new version on your system. You can alternatively download version 1.75 of the application from the official website.