How to move installed Windows 8 apps to another drive - gHacks Tech News
ghacks.net

How to move installed Windows 8 apps to another drive

If you are using a Solid State Drive as your main drive in Windows 8, you may have found it to quickly fill with data, apps, programs and of course the notorious ever growing Windows folder. It depends a lot on the size of the drive of course, and if you happen to use a 256 Gigabyte or larger drive, you may not run into space issues that easily. Still, it is always good to know your options.

One of the things that Microsoft has not integrated into the operating system is an option to move apps that you have installed from the Windows Store to another drive. This reminds me a lot of how the popular gaming platform Steam started out, as it too would not allow you to install games on another partition or drive of the computer so that you would run into storage issues rather quickly (Valve recently updated that behavior so that you can now install Steam games on other partitions).

Windows Store apps are small in size when you compare them to the average game installation for instance and even lots of programs. The Windows apps folder on my Windows 8 system has a size of less than 3.5 Gigabyte and I have more than 100 apps installed on the system (because of my Betanews weekly series). Still, if you can't find anything that you want moved the Windows Apps folder may be an option.

Attention: This works only in Windows 8 but not in Windows 8.1. Windows 10 users can change the default save location for apps and move individual apps to other drives.

You find the folder where all apps are stored in under c:\program files\windowsapps\. Note that the folder is hidden by default and that you are not the owner of it so that you can't open it or do anything with it. 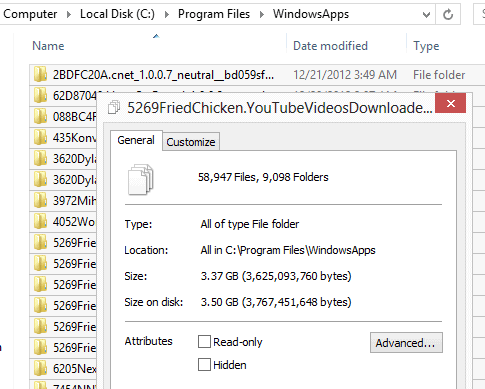 You need to run the following commands on an elevated command prompt to move the folder to another drive. I would not recommend moving only single apps but that is theoretically possible as well.

Windows won't really know the difference once you complete the operation and everything should work just like it did before. The only difference is that all new apps that you install and data that apps generate are now saved on the new partition or drive and not the old. (via)

Martin Brinkmann is a journalist from Germany who founded Ghacks Technology News Back in 2005. He is passionate about all things tech and knows the Internet and computers like the back of his hand. You can follow Martin on Facebook or Twitter
View all posts by Martin Brinkmann →
Previous Post: « How to uninstall Microsoft Office 2013 or Office 365
Next Post: Where are Softonic downloaded programs saved to? »