Windows Chief Marketing Officer and Chief Financial Officer Tami Reller said that this is a "similar sales trajectory" as that of Windows 7. And it seems so, considering that Windows 7 launched at around the same time three years ago and managed to sell 60 million copies by the end of January. But, is Windows 8 really more popular than Windows 7 or at least equally so?

The first issue that I have with the numbers is that we do not know if they cover equal grounds. While the 60 million copies of Windows 8 include upgrades and sales to OEMs, we do not know if this is also the case for the Windows 7 figure as it is not mentioned in the article. The mentioning of sales to OEMs however indicates that at least some of the licenses may not yet have been sold to end customers, as it includes machines that have been assembled and shipped but not yet sold or deployed. 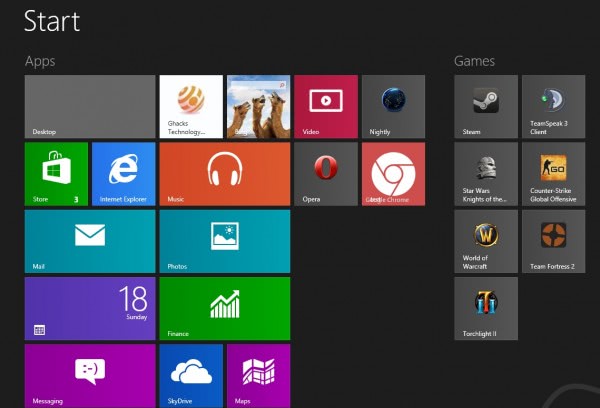 The second aspect that needs to be considered is pricing. Windows 8 Pro upgradesÂ  are available for $39.99 until the end of January 2013 for any version of Windows XP, Vista or Windows 7. Compare that to the promotional price of $99.99 for Windows 7 Professional or even the Windows 7 Home Premium price of $49.99 during the Windows 7 pre-order promotion.

The digital download of the upgrade to Windows 8 is available for half the price that the comparable Windows 7 upgrade offer was available for which most certainly did increase sales of Windows 8 licenses. By how much? We do not know. What we do not know however is that Microsoft's revenue per license will be lower for every copy of Windows 8 the company sells during the promotion than it has been during the Windows 7 promotional sale. Then again, the Windows Store may make up for that and it will be interesting to see how much revenue Microsoft generates from it and how that changes over time. Reller confirmed in the same article that the store has seen more than 100 million app downloads.

Despite that, it seems that Windows 8 is doing considerable well sales-wise even though it is likely that at least some users made the decision to buy upgrades for the promotional price without installing them yet on any of their PCs. Still, a license sold is a license sold and that's what counts.

Microsoft Office in trouble in Germany due to GDPR

Google discovers a Windows exploit that points to distribution of spyware

Previous Post: « Fix The Video Failed To Play errors in Windows 8
Next Post: « How to move installed Windows 8 apps to another drive