How to check for and terminate background apps in Android - gHacks Tech News
ghacks.net

How to check for and terminate background apps in Android

One of the things that I dislike about the Android operating system is that you do not really know which apps are running in the background until you open the Task Manager. The Windows 8 operating system has the same issue actually when it comes to store apps that you run on the system.

The thing is that it makes sense to be aware of the programs that are running in the background as it can have privacy implications and also performance related implications, for instance when a program is draining the battery because it is using the phone's cpu frequently.

The easiest way to check up on all apps, that is programs that you have installed on the phone or table, or that the device shipped with by default, is to open the Task Manager. To do that tap and hold the Home button of the device for a couple of seconds until the list of recently started applications appear. 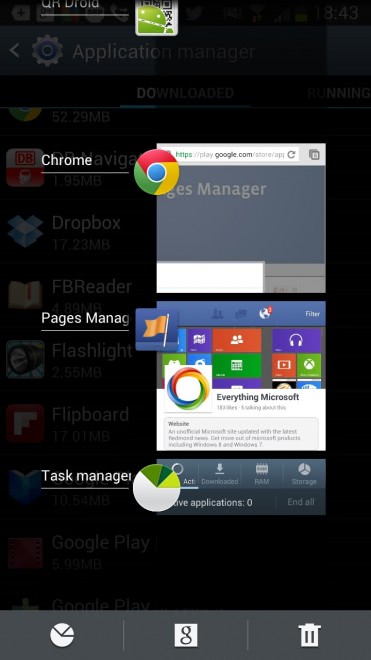 Not all of them are running in the background, and the reason for opening the list of recently opened apps is that this is one of the fastest options to load the task manager. Just tap on the task manager symbol to open it.

The list of active applications is displayed here. Each app is listed with its name, the RAM and cpu it uses at that point in time. You can end select applications from here or all at once. 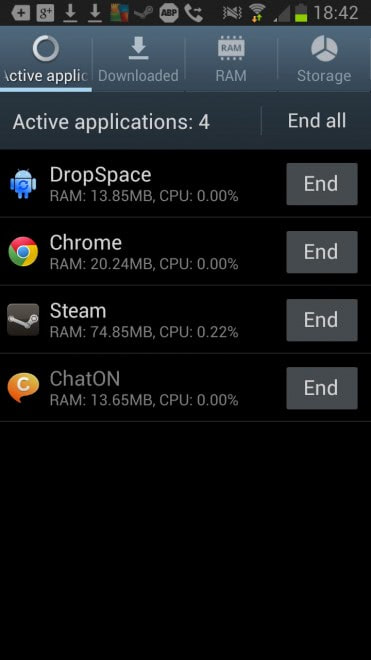 It does not always make sense to terminate background processes. If you want to return to the web page you visited recently you may want to keep the browser open, and if music plays in the background you probably do not want to terminate the music player. The same is true for chat applications that keep you available so that others can message you.

What you can do however is check up on the apps listing to find apps that you do not want to run in the background, or at all. I'm for instance not using the ChatOn application so that it makes sense to terminate the app and maybe even uninstall or disable it from the phone if it turns out that the app is automatically running in the background all of the time.