Mozilla has just released a new version of Firefox stable, bringing the version of the browser to 13.0.1 for all supported operating systems. The release notes list both the changes that Mozilla made in Firefox 13 and the three bug fixes in the Firefox 13.0.1 release, which had been released two weeks earlier.

If you have been using Firefox recently you may have noticed that a Flash upgrade has caused serious crash and freezing issues for some users, which the new version unfortunately does not address completely.

When you look at the bug fixes, you will notice that one addresses a Flash 11.3 issue. According to the fix, Flash 11.3 sometimes caused the web browser to crash on exit. This fix obviously does not address other issues that Firefox users may experience with Flash 11.3 installed in the browser. Both Mozilla and Adobe seem to still be working on fixes for the issues that have been caused by the Adobe Flash 11.3 upgrade. For now, Firefox users can use workarounds which we have posted in the article linked above. 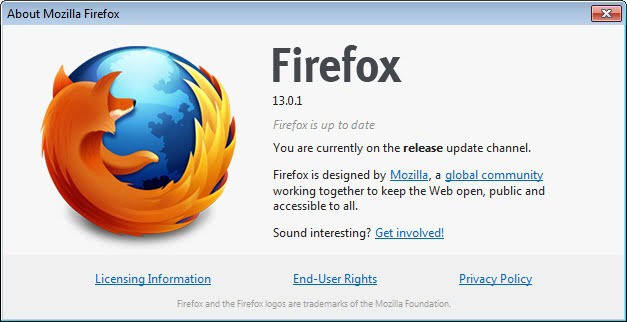 The second bug fix addresses issues in Hotmail, where Firefox did not auto-update the service's inbox, did not update the unread email count in the title bar, and where Windows Messenger did not load anymore. The issue has been fixed by Mozilla, and Hotmail users should be able to make use of the site's functionality again.

The third and final bug fix addresses an issue for Hebrew users who noticed that text got rendered incorrectly at times.

Firefox 13.0.1 is already available for download at the official Mozilla website. Existing Firefox users should see update notifications in the browser once they start it up the next time. It is recommended to update as soon as possible, especially if Firefox is affected by any of the three bugs.