Tab stacking, originally implemented into the Opera web browser and later on added to Chrome's experimental features in a slightly different fashion seems to be one of the features that every browser will end up with eventually. Firefox users up until now did not really have an option to stack their tabs. Other options were available though in form of configuration changes to reduce the minimum allowed width for tabs in Firefox, and in form of the NOverflow extension which reduced the width of tabs in the browser automatically to continue displaying all tabs without scrolling on the screen.

Tab Stacking for Firefox introduces yet another concept, one that may be confusing at first. The developer tried to tackle the same problem that the NOverflow developer tried to resolve with the extension: display more tabs on the screen without scrolling.

Unlike NOverflow, Tab Stacking does so by reducing the width of tabs that are farthest away from the active tab. Take a look at the following screenshot to see how this looks like in the browser. 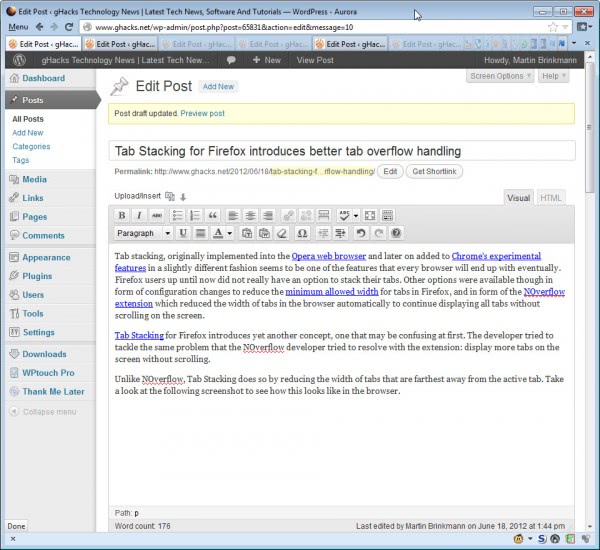 As you can see, tabs are reduced to their favicon, actually a bit smaller than that even, on the far right of the screen. If you activate a tab in the middle, you will notice that tabs on the left and right will get reduced to that size, and an active tab on the right has tabs on the left reduced to it. The switch is fluent but visible as an animation when tabs sizes decrease or increase when you open new tabs or switch active tabs.

Some Firefox users might prefer a slightly larger minimum size so that the full favicon gets displayed on the tab bar. This can be configured in the add-on's preferences.

All you need to do is set the minimum tab-width of a stacked tab value to 26 to display the favicons in their entirety. You can alternatively identify tabs by hovering the mouse over them, which displays the page's title in an overlay on the screen.

Tab Stacking introduces an interesting new concept to Firefox that users can make use of to fit additional tabs in the browser window. This works very well for browser windows with a few dozen tabs opened at the same time. If you are one of the users with hundreds of tabs open, you may still have to scroll though. Still, you do see more tabs on the screen at the same time.