Good news for PC users who plan to purchase a PC with Windows 7 in the coming months. New details about Microsoft's upcoming upgrade promotion have come to light. News broke a few days ago that Microsoft was planning a promotion for customers who'd purchase a PC running Windows 7 Home Basic or better in the near future. What we did not know at that point in time was the upgrade price, when the promotion would launch, and what upgrade paths were offered.

Today, additional information about the deal where revealed by Mary Jo-Foley and Paul Thurrott. The promotion starts on June 2 according to their information, which falls in line with the release of the Windows 8 Release Candidate. With Windows 8 rumored to be released in the fourth quarter of 2012, it gives customers buying a PC with Windows 7 ample time to upgrade to the operating system, should they wish to do so.

The two revealed further that the upgrade price will be set to $14.99 for all eligible Windows PCs, and that customers will always receive the upgrade to Windows 8 Pro, regardless of the Windows 7 operating system that shipped with the PC (provided that it is eligible of course). 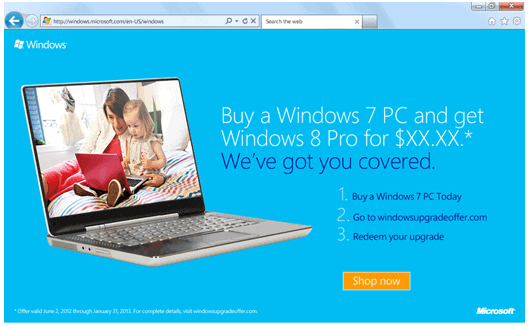 This marks a shift in strategy, especially when compared to the Vista to Windows 7 upgrade promotion. Back then, Windows Vista customers could upgrade to Windows 7, but only to the version closest to the one that shipped with the PC that they did purchase back then.

Windows 8 Pro is Microsoft's retail flagship product, with the only other version competing on the desktop simply named Windows 8. When you look at the differences between the two versions, you will notice that Windows 8 Pro ships with business related features that the regular version does not ship with. This includes Client Hyper-V, Domain Join, Group Policy, Remote Desktop (host), and Bitlocker encryption.

It is interesting to note that buying a Windows 7 PC and taking Microsoft up on the upgrade offer may come cheaper than buying a Windows 8 Pro PC directly when the operating system comes out.

The upgrade price is more than fair, especially since users get the Pro version of Windows 8, even if they only purchased a PC with an "inferior" Windows 7 version. Keep in mind that this has not been officially confirmed by Microsoft yet.

I'd suggest to check with the retailer first before making any purchases, to make sure that the PC you want to buy is included in the upgrade promotion.

Previous Post: « Join, Edit and Convert Media With FreeMediaConverter
Next Post: Windows File Analyzer, Check Out What They Reveal About You »