Microsoft has long been criticized for not updating the Windows' operating system default file browser with features such as tabbed browsing, a second file pane or yuck, a ribbon interface. Back in 2010 when I reviewed Better Explorer for the first time, it did not offer much besides a tabbed browsing interface that allowed you to open multiple folder locations in the file manager at the same time to switch easily between them.

Better Explorer 2.0 Alpha has been released about a month ago, and after testing it for some time, I have to admit that the program has improved considerably. Before we take a closer look, I'd like to point out that the new file manager version comes with a ribbon interface. If you like it, great, if not, you probably have stopped reading by now. If you have not, note that you can minimize the ribbon just like you can in the Windows 8 Explorer.

When you launch the program for the first time after installation, you will notice that it has changed a lot in comparison to the first version released nearly two years ago. You'll obviously see the ribbon interface at the top, the new bread crumb path, or the search, which all have been integrated into the file manager. What you will also notice is how well everything looks in the interface, thanks to the clean fonts and the slightly larger font size used by Better Explorer. 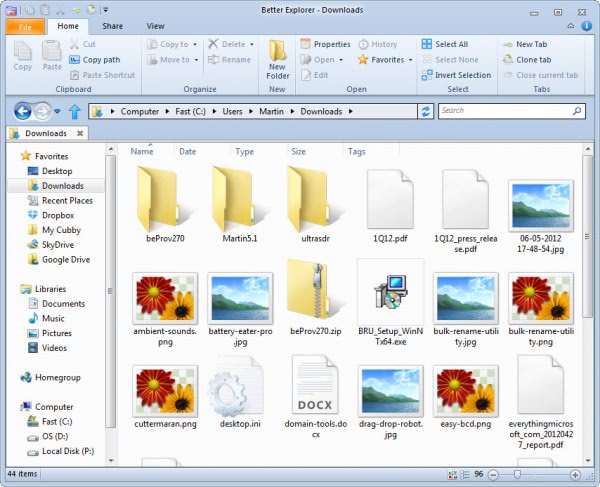 The ribbon lists the majority of features and controls the program offers. Here you can clone tabs, copy paths, handle a variety of file operations, or change view modes quite easily.

The file manager supports tabbed browsing which you can use to quickly switch between open folders. While not as comfortable as two folder panes next to each other in many regards, it is still something that the standard Explorer does not offer.

When you look in the program settings, you will notice that you can set the program to become the default file explorer of the operating system. This only worksÂ  for the shortcut Windows-E, and the icon itself yet. Another interesting feature is to integrate third party copying software support, Teracopy for instance, in the program from the preferences.

If you like the way Windows Explorer looks like in Windows 8, or if you like ribbons, or the font that Better Explorer 2 is using, then you may want to take the program for a test run. Keep in mind though that it is still an alpha version, and that it is not intended for productive environments.