To Much Whitespace On Google+? Reduce It!

If you are already seeing the new design over at Google's social networking site Google+, you may have noticed the vast amount of whitespace on the site. This is especially apparent if you are using widescreen monitors and have the browser window maximized on the screen.

The big issue here is that both sidebars have a fixed size, and that the middle content area is dynamically resized, which basically means that the wider your browser window is, the larger the content area is.

The content in that area is however not dynamically resized like the content's box, which causes the large whitespace area. 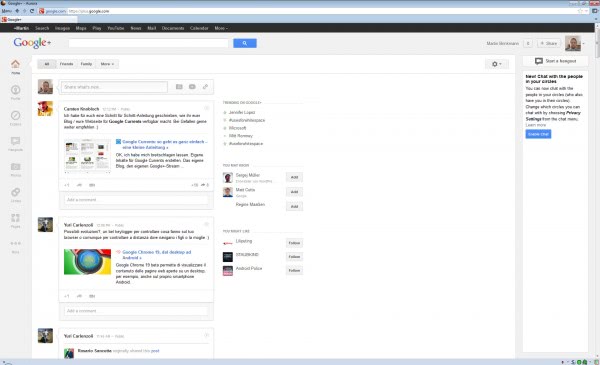 The image above shows the new Google+ layout on a 1920x1200 computer monitor in maximized mode. Lets take a look at some of the solutions for this issues.

Google+ Center Posts Stream - This userscript centers the stream on the Google web page, which may make the site more usable for some of you. It does not resolve the whitespace issue though, it just shifts the content a little bit.

Whitespace Remover for Google Plus - This Google Chrome extension centers the stream just like the Google+ Center Posts Stream userscript does. The same developer has created a Firefox add-on that is offering the same functionality as well.

It is not really clear why Google made the decision to use that much whitespace in the content area. While it is likely that this space may get filled up eventually, it is something that the company should address in the near future as it is a usability issue.

Update: The extension is no longer needed as whitespace has been filled with contents on Google Plus.