A big difference between video searching on Google and Bing is Bing's video preview feature which can display previews right on the Bing search results page for videos hosted on select sites such as YouTube.

Previews up until now were not exactly large in size, but still better than no previews at all, as previewing may speed up the search for videos as it allows you to quickly preview a video to find out it if is suitable.

Microsoft a few days ago announced a number of changes on the official Bing Community Blog. Troy Ma from the Bing Multimedia team revealed those changes in a blog post.

Probably the biggest change from a user's point of view is that video previews have been updated on Bing so that they now play in larger preview windows on the main search results page. This works well in conjunction with the new video strip that you will see in related searches on the Bing website. Bing places the video results next to each other, while Google places video results below each other.

The preview works for YouTube videos and at the time of writing also for videos hosted by select other video streaming sites. Videos from some sites, Vevo videos on YouTube or videos from Universal Music, are not available as previews though.

It is also interesting to note that videos without preview open on the site they are hosted on while YouTube videos directly on the Bing video page instead. 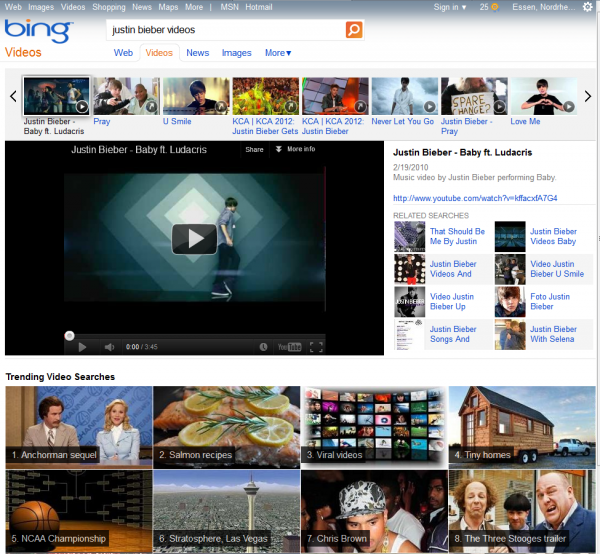 Note: Bing removed the video filmstrip from the site again that is described below.

The page itself has received an update as well. A video filmstrip was added to its top that you can use to select a new video after you are done watching the old one. The video playing area has been enlarged on the page as well to play the video in a better resolution on Bing.

When you use the Bing video search - as opposed to regular Bing Search with video results, you will notice that the video results page is now featuring an infinite scrolling page of video goodness. As long as there are videos to show, you can scroll down the video results page to take a look at them. Previews here work like they did before, and are not shown currently in larger preview overlay windows.

The video results page lists suggestions at the top, which you may already know from other searches on Bing. This way you can refine your search with a single click, if you could not find what you were looking for directly.

The changes are being rolled out for all localized versions of Bing that support the video search feature.