Remember the original Tron movie, or the remake that was released a few years ago? Then you can also probably remember the racing sequence in the movie. Armagetron Advanced ports that part of the movie to a computer game, and slaps some 3D on it. The game is available for Microsoft Windows, Linux and Apple Macintosh systems, and features both a local and multiplayer mode.

I suggest you first go into System Setup to configure things like the display resolution, windowed or fullscreen mode, or advanced graphics processing settings. You navigate the menus with the cursor keys, and make selections with return.

Once you have done that you should head into Player Setup to take a look at the keyboard shortcuts for all local players. Player 1 for instance uses the keys z and x to turn left or right, v to brake and s to chat. Here you can also select the viewport mode, which basically splits the screen and works similar to gaming systems that use split-screen for local multiplayer. This also means that you can play with up to four players on one computer. 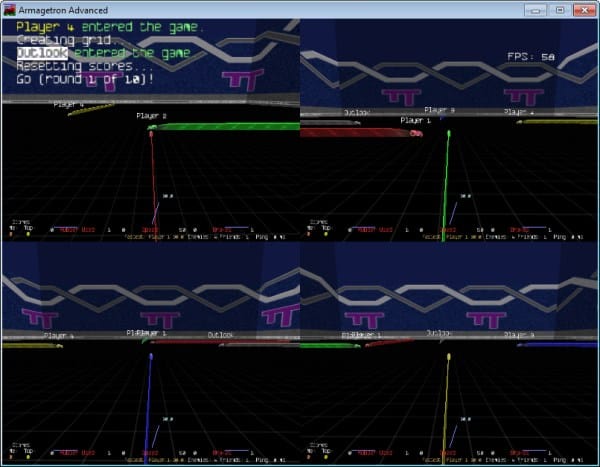 If you never played a Tron game before, you'd probably ask yourself right now what the game is all about. The main task of the game is to stay alive longer than all of your opponents. Your vehicle marks territory that you race across, making it a solid wall for anyone who runs into it (even you). You now need to secure a large area on the map for yourself, and reduce the area for other players at the same time. The less room they have left, the sooner they will crash into a wall and its game over for them.

You can play the game locally against the computer or human players, or switch to multiplayer which gives you both LAN and Internet multiplayer options. You can also assign players into teams, to race two versus two for instance. The player count maxes out at 16 players in multiplayer, which in itself is fairly impressive for a free game. There

Here is a game trailer to get you pumped up about the game.

While it is fun and all for some time to race against the AI, the game begins to shine when you play it against friends either locally or on the Internet.

You can download the latest version of the Tron clone from the official project website. The game has a size of a few Megabytes and is well worth the download.